First off, what an amazing cover illustration. 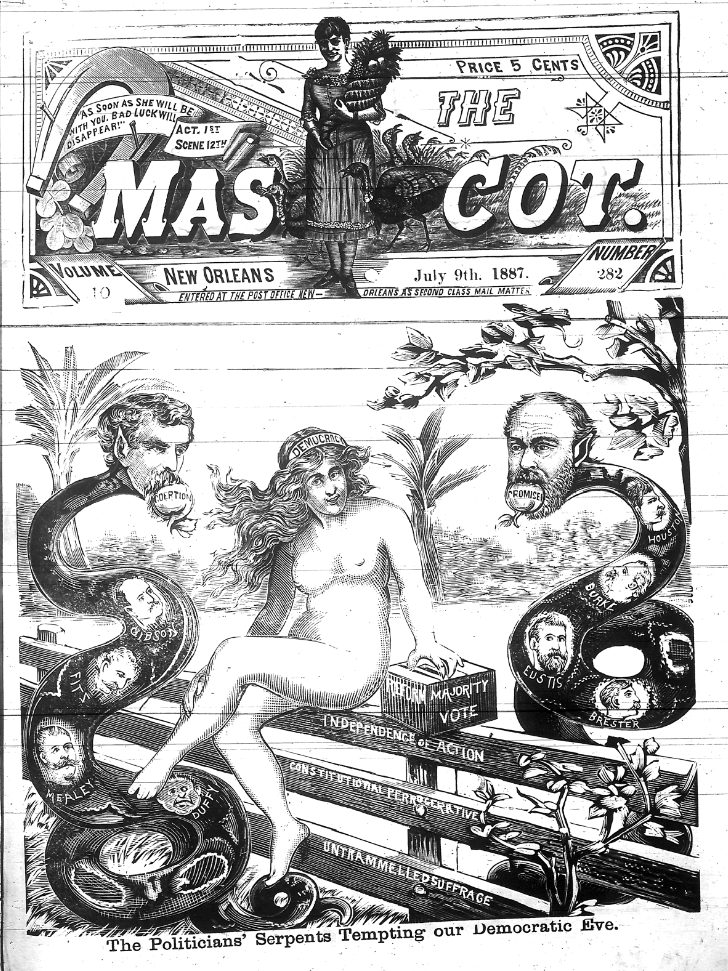 Here is the article that accompanied it:

The newspapers throughout the State, which are held in the grasp of the politicians and office-seekers of both factions, and which refuse to recognize the right of all true and good men to aspire to the Governorship of their State in the next election, are wailing over the fact that so large a number of intelligent voters throughout the State are retaining an undisguised neutrality in the contest between the two chosen candidates of the politicians. Others of these “organs” soundly berates those independent voters who propose to enjoy the privilege accorded them of selecting their candidates for office when these candidates are within the democratic party, and demand that these voters should “get down off the fence” as they contemptuously ascribe the position of these neutral independents. But these bondsmen may writhe and howl in agony as they will; they may abuse, condemn, bulldoze, and threat as they will. The independent voter who holds the majority vote, the balance of power will sit undismayed and undisturbed on the solid substantial “fence” of strict neutrality between office grabbers and professional place-hunters, the stout rails of which; “independence of action,” “constitutional prerogative” and “untrammeled suffrage” are proof against the encroachments of time, or the attacks of vermin and reptiles.

True reform does not consist in the city ring exchanging or swapping offices with the State ring; nor in the office-holders of both rings after sixteen years service swapping offices among themselves. It consists in getting new men into these offices, new ideas, new blood, brains and brawn as it were, into the anatomy of State to see if the change will not be productive of good results. As fresh new blood infused into the physical body strengthens and improves it, so will the infusion of new blood improve the body politic.

Our cartoon portrays the situation. Reform Democracy sits upon the substantial structure of neutrality as a political Eve holding in her hands the “majority of votes,” while the spotted, ring tailed serpents of the office seekers factions rise up and endeavor to tempt her. One offers the tempting apples of “promises,” while the other attempts to force upon her the less tempting peach of “coercion.” They will both fail in their attempts.

And on another note…

In my lecture I mentioned that during this time in New Orleans, the city had an annual budget for dog catchers to leave out poisoned sausages for stray dogs – but no budget to do anything with the dogs once they ate the poison. Well, also on this day 125 years ago, this article appeared.

Now that City Council has at length passed Alderman Patorno’s ordinance providing for the poisoning of all unmuzzled vagrant dogs, what about the removal of the carcasses of the defunct canines? That the roaming cur has been long voted an intolerable nuisance, especially by the belated pedestrian, is very true. But, all the same if the city don’t provide some means for the prompt removal of the slaughtered K— [cannot read word but it is capitalized], it will be but creating a greater nuisance by the removal of a lesser one. It is a well-known lamentable fact that in nine-tenths of the street of this city a garbage cart is never seen. And this is more especially in the upper part of the city. In the neighborhood of Napoleon avenue. (the great boulevard) such a thing as a garbage or city cart has not made its appearance for over three years. So, reverend signors, ere you cause the air polluted by the festering carcasses of murdered canines, first provide some means for the removal of the same. There are dead animals enough lying around up there at present without adding to assortment. Poison the curs, but do, pray, send along Fitz’s hearse to bury them.