Okay, I am on vacation. Morning on the beach eagle-watching, afternoon doing wedding prep for my nephew, evening dinner with friends and one free-for-all track meet… Determined to make this summer goal.

As I stated in my lecture, toward the end of the Mascot run, they focused a lot on local New Orleanians who were getting divorced – The Divorce Mill. Sometimes they just ran lists on the cover. Here is a small example of what they would write about. 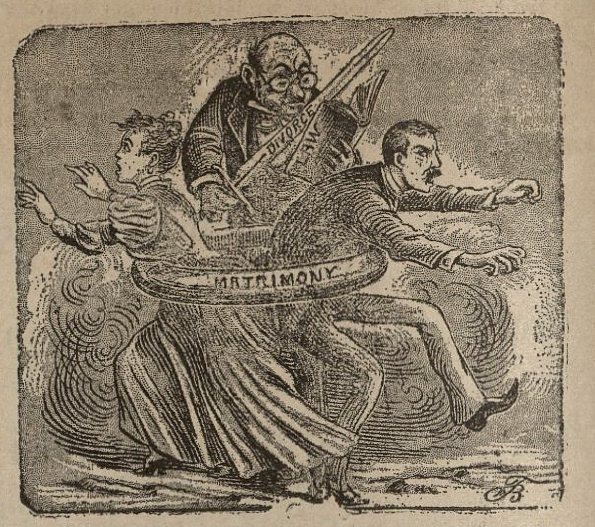 Several Cases Where The Courts Will Settle Domestic Infelicities

Frank Dumavant is what might be termed the broth of a boy. He married Miss Belle Eatman, April 20, 1889, and one child, Bertha, aged four years, is the fruit of that union. Frank seemed to be of the opinion that a man who eats beef all the time would do well by changing his diet at times to a little mutton, so the amorous Frank took up his sleeping quarters at No. 118 Customhouse street, from April 1st to the 17th. His wife thinks him an April fool. And he was not lonely in his vigils, for la belle Natzon shared his couch. Mrs. Dumavant has refused to live with Frank since then, and now asks for a divorce.

Annie Frisbie was married to Edward Kendall April 10, 1880; four years ago he abandoned her and has since been living with Malinda Hurdle in open concubiange. She asks for a divorce.

Mrs. Gerturde T. Blackeslee married Horace D. Price in Mobile on Nov. 22, 1871. They lived in this city from Sept. until June 1882. Mrs. Price now wants a seperation from his husband on the grounds of habitual drunkenness and his being a worthless man. Her address is 2233 Magazine Street.

James Edwards wants a divorce from his wife, whose maiden name was Eliza Alleck, on account of her having deserted him and since then living in adultery with George Stepney.