On  August 29, 1891, under the leadership of Francois Bildstein, the Mascot ran the following announcement:

Since the MASCOT has sternly eliminated from its columns all matter which might savor of vulgarity or obscenity, and has improved its tone; many of our most prominent citizens have advised us in the interests of the city to enlarge the paper and give to New Orleans a journal which in size and quality will equal such well-known papers as Texas Siftings or the Arkansas Traveller.

After careful consideration we have decided to do so; next week our paper will be double in former size and will contain many new and attractive features. As of old, we will continue to expose social, commercial and religious frauds, but will also furnish our readers much other attractive and humorous matter. Our aim is to make the MASCOT the best weekly illustrated south of Mason and Dixon’s line; we trust that the advertisers and reading public of this city will aid us in our efforts; it will not only benefit them and us, but will also benefit the City of New Orleans.

Underneath the pledge of eliminating all “vulgarity” and “obscenity” was an article titled, THE GIRL HE LEFT BEHIND. The Boodle He Took With Him. 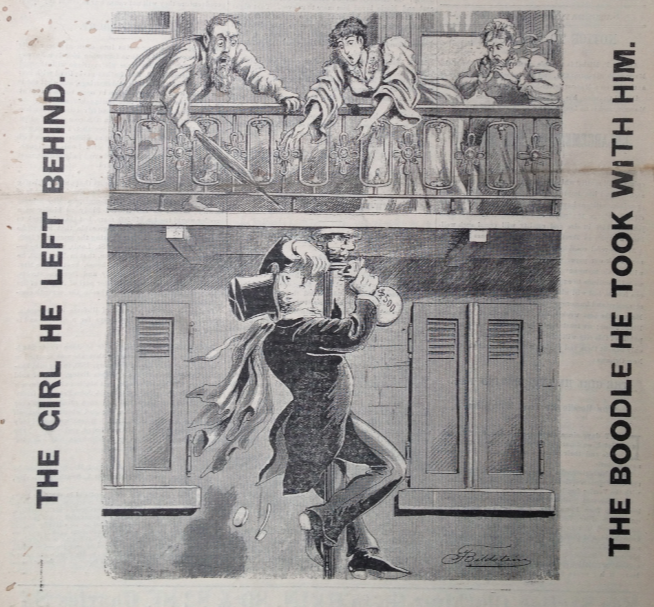 Interesting note – this cover has been the only example I have seen of the headline running vertically alongside the illustration.

2 Responses to Mascot Mondays #11 of 12: Enlargement