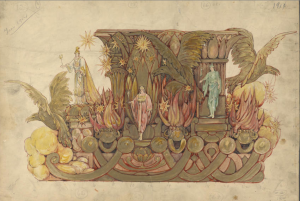 It appears that Mardi Gras started out with a bit of an arched eyebrow (a highbrow at that) but within a couple of years had grown into a cultural institution New Orleans was proud of.  From the Times-Picayune, February 13, 1839:

Of all the outlandish turn outs it has even been our lot to witness the one which graced our streets yesterday takes the lead. It was longer, broader, further through, and larger round than any procession that had preceded it in this goodly city, and occasioned an excitement and drew together a crowd of people such as has never been congregated in New Orleans within our knowledge.

Shrove Tuesday, or “pancake day,” being the last before Lent on which all good Catholics can eat meat and sleep with clear consciences, they generally get up a “cake-show extraordinaire,” something a little ahead of the common run – but yesterday their efforts eclipsed all their former turn outs, at least any one we have seen.

By half past three every window, balcony, stoop and door-way in Royal street was filled. The knowledge that the masqueraders were to move up that street, drew every body there, and the beauty of the day, the beauty of the ladies, together with the general interest manifested by all, rendered the scene uncommonly exciting.

About four, the grand procession, with banners, fish poles, morus multicaulis trees, badges, and music, took up the line of march. We can only say this much of the music; it was of a species decidedly republican, every one having an instrument adapted to his fancy, and playing such tune as came first in his head, or no tune at all. Of the procession, some rode in splendid barouches, some on drays; some were mounted on splendidly caparisoned Arabians, others on surly-looking dogged donkeys. There were, so far as dress went, heathen and Christians, Turks and kangaroos, ancient Greeks and modern Choctaws; friars and beggars; knights and princesses, hard-favored ones at that; polar bears and chicken-cocks; “Old Corn Meal” and somebody we took for Mrs. Trolloppe – in short, we saw every body and every living thing in the moving mass except the giraffe, and even that might have been alone in disguise, as there were several tall customers. There was also a very “flowery” genius along, as some of our friends who got covered with meal can testify.

The grand squad moved up St. Charles to Julia and then down Camp, directly by our office, to Chartres street. Where or how they broke up is more than we can say. We misunderstood it to be their intention to join in the masquerading scene of Gustavus III, which was performed last evening at the Theatre d’Orleans. They were well dressed for it at any rate.

Thus has passed “Mardi Gras,” and may we all live to see fifty more just like it. The whole affair was got up by some of our most public spirited young men, whose design was not only to create sport and merriment, but they also had a charitable object in view, as whatever sum was raised, over and above the expenses, is to be given to the Orphan Asylum or some other institution of a similar character. 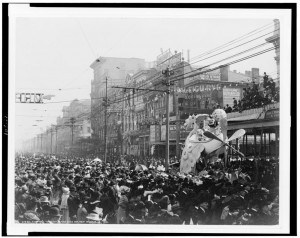 I believe that “Mrs. Trolloppe” is a little dig on Frances Milton Trollope, an English novelist who was anti-slavery and was said to have influenced Harriet Beecher Stowe’s Uncle Tom’s Cabin. It’s especially interesting coupling her with “Old Corn Meal,” who turned out to be quite a fascinating individual! I will write more about him in a bit.