Last week I was strolling on the Tulane campus, trying to capture students returning for the semester when my mind drifted to Mardi Gras (as it often does). I thought about all my fabulous creative friends who participate in Carnival in so many ways and how much they lend to the spirit of New Orleans. And suddenly I thought it would be a great idea to do an article about Tulane alumni who participate in alternative krewes. I emailed some of my bosses, pitching them the idea, and they loved it.

I emailed my friend Dorian to ask him if he knew of any 610 Stompers who were Tulane alumni who would want to be in this article. He said he would send out the word.

Then I texted my good chum Scott Galante (I knew he was a Tulane alumnus) and asked if he wanted to represent the Krewe of the Rolling Elvi. Yes! As I was beginning to brainstorm for another group (I wanted to do an all-female krewe) one of my bosses emailed me and said I could also use staff and students. Perfection! Dorian works for Tulane. Now I was really getting excited because Dorian devotes a lot of time and pizazz to the Stompers and I was happy we could highlight him. But to find my girl…

Trixie used to be in the Muff-a-lottas. I actually had a chance to be in the original group but it happened the same time as my starting graduate school and I was on vacation for the first few dance practices so I sadly declined. Anyway, Trixie sent out an email to the group and I got a bunch of lovely responses but one of them was from a student named Kristin Condotta. I thought having an alumnus, a staff member and a student would be the perfect representation. A bonus was that Kristin was also a history major! She is a Ph.D. candidate whose work focuses on Irish New Orleanians before 1820, especially concentrating on the consumer habits they brought with them in migration. Sounds fascinating; I cannot wait to talk with her about it more.

We had to scramble to find a place and time for all of us to meet, but luckily we were able to settle on Lee Circle last Saturday afternoon. The shoot was quick and fun – everyone was natural and sparkled with charisma. But writing the article was a bit more of a challenge.

So, here is the article!

And here are some wonderful details and facts about my three fabulous subjects that, unfortunately, could not make the cut:

Scott Galante is a wonderful, generous, fun human being (okay that was not in the original article but I wanted to just put that out there). The other krewes that Scott is in are the Phunny Phorty Phellows and Krewe du Vieux. He is also a guest lecturer in toxic torts at Tulane Law every year. His krewe nickname is Jearl. Krewe of the Rolling Elvi (KRE) hosts a slew of annual events and participates in just as many charities: the Christmas Parade, San Fermin NOLA, Children’s Hospital, and the Odyssey House. And as a personal bias, KRE has some of my favorite throws of the whole carnival season! 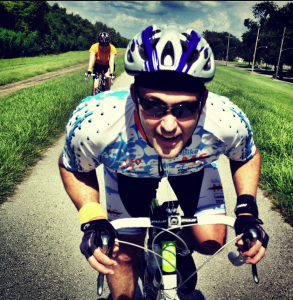 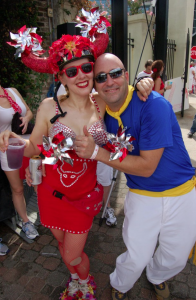 Scott and I after the 2012 Running of the Bulls!

I just met Kristin Condotta for the first time on the photo shoot. She is lovely and charming and immediately clicked with the gentlemen. They are both affectionate guys so they automatically gave her a big hug. Kristin is a full-time student but also works part-time at the Old U.S. Mint (more to talk about!). The Muff-a-lottas (Muffys) also participate in Mid-Summer Mardi Gras, Molly’s St. Patricks Day and Halloween parades, the Italian Parade, and Tucks. Her krewe nickname is “Pattie” because, according to her, “outside of being cool and 50s, it references my school work and the fact that I dance like a Peanuts character (a la Peppermint Pattie).”

Dorian-gray Alexander is also a wonderfully kind and creative person. Damn, I am lucky to have such awesome friends. Anyway, the 610 Stompers are, to quote Dorian “BizE!” Yes indeed! They have two annual fundraisers for charity – their Debutante Ball and Ball Crawl. They also contribute to multiple others: ALS Association, Cystis Fibrosis, Leukemia, Breast Cancer, Special Olympics, Gleason Gras, Louisiana Organ Procurement Agency. And they even do PSAs – Dorian is on billboards and buses everywhere for the Pedestrian Safety Campaign! They do private parties and public events. They have performed for the Big Easy Rollergirls (WOO-HOO – CHECK OUT MY YOUTUBE VIDEO HERE), the Hornets, Saints, and Zephyrs as well as in the Macy’s Thanksgiving parade. They will also be performing at the Kentucky Derby this spring! And they raised over $100,000 for charity last year! Dorian’s nickname is Teapot Shakur. You can also check him out in the 610 Stompers 2013 Calendar. You can get them at P.J’s on Magazine Street and Fleurty Girl and be sure to bookmark the month of June! 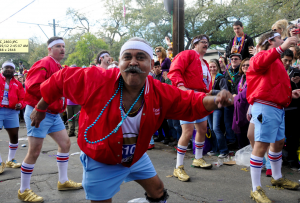 Dorian struttin' his stuff in a 2012 Mardi Gras parade

Thank you Scott, Dorian, Kristen, Scott Frilot, and John Haffner for your help with this article. And here’s hoping that everyone has a wonderful Mardi Gras as we will!!!

Me and my glamourous models!