Well, I turned in my first monthly progress report for my book and got some good feedback from my editor. Movin’ along! I would say I am about 8-10% done. Right on schedule.

Here are some things I learned (and can share).

1. Bunny Friend was not named after Joseph and Ida Weis’s son who was killed in World War I or for that matter, World War II.

2. The Roosevelt Hotel was the first establishment in New Orleans to receive a case of whiskey, the minute Prohibition ended. This intrigued me. Through co-workers, I contacted Earl Lizana at the Roosevelt Hotel and told him the news and suggested that they should have a ceremony honoring the end of Prohibition (this will be the 80-year anniversary). With the Roosevelt’s rich historical tradition (just look at their Sazerac Bar) and New Orleanians’ love of celebrating anything revolving around alcohol, I think it can become a new and pleasurable tradition. So if they do have a ceremony… you are welcome!

This is what I found in the Times Picayune from December 6, 1933.

Meanwhile, a stock expected to last the country for some time is in the warehouses of wholesale drug companies which have been imported the beverage for medicinal purposes.

There will be no whisky problem, dealers declare. A large supply is on hand and distilleries are operating merrily.

The first legal delivery of whisky in New Orleans was made shortly before 7pm Tuesday by United Liquor Importers and Distillers, Inc., 223 South Peters street, when a truckload was taken to The Roosevelt just as repeal became effective.

I took this when I was scouting locations, angles, time of day.

I would also like to thank Richard Campanella, who I forgot to mention in my original post about my book contract. Before Winter Break I stopped by his office to chat and hang out and I mentioned I wanted to write a book proposal on the history of New Orleans’ street signs but was having a hard time figuring out how to divide the neighborhoods up. I spent hours pouring over maps and still was not sure how it could be done.

As we were talking about the way people identify and claim neighborhood regardless of map boundaries, he told me I should organize it by theme. LIGHTBULB!

Literally, everything crystallized. I thought about it over Winter Break, did some more reading (Campanella mentioned a book I never heard of called Stories Behind New Orleans Street Names by Donald A. Gill. It’s been out of print for awhile so I had to special order it. While informative, unfortunately, I am finding a lot of mistakes in it and I am not trusting it entirely).

Big thank you to Richard who is always so gracious with his vast knowledge. And he will also get a shout out in my book.

Anyway, I am not a big twitter person, I don’t really read twitter; I have friends who have tried to get me to embrace it, but… Anyway, another friend turned me on to Campanella’s twitter feed. Fascinating! If I am ever going to take it seriously then I will model it after his. If you are a fan of New Orleans you won’t be disappointed!

And overall, I managed to balance my time fairly well. The weekend before it was due, I did spend countless hours at my desk but was also able to have some fun.

I went to the Treme TV show set sale. I picked up a piece of great art, a lamp, an urn/cookie jar and a real fire hydrant! I have never had a desire for a fire hydrant but when I saw it in the middle of the warehouse I had to have it. Apparently its backstory is that scenes in “Gigi’s Lounge” were shot on a soundstage. They had the fire hydrant right outside the doorway as part of a realistic view out the door. 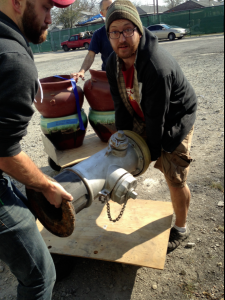 The crew who loaded it for me seemed happy to see it go. 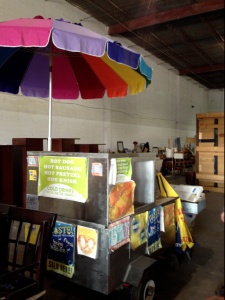 I really wanted this pretzel/hot dog stand but what the hell was I going to do with that?

And a confession, I have never actually seen Treme. I don’t get HBO. Although, I did just finish watching “Game of Thrones” Season 2 on DVD and I am looking for a friend who will let me watch Season 3 at their house in exchange for snacks and wine!

I also let Belgian chef Julie Ragusa-van Schooten host a vegan tapas workshop at my house. It was great catching up with old friends, meeting new ones, and learning new recipes and techniques. 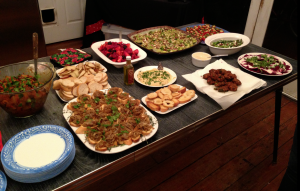 Some of the spread

Sadly, I did miss my friend’s band playing, but I will make it up to her. I love balance. So anytime I can achieve something and also have fun I am HAPPY!