I just finished my 4000 word article on Prohibition for the fall issue of Louisiana Cultural Vistas Magazine. I don’t think I have ever labored over words more, or cut, added, cut, added, cut – so much in my life.

I tried to cover the story as best as I could – but it is an overview of Prohibition in New Orleans. I would love to write a book on the topic, because it has never been covered and oh!, do I have hundreds more stories to tell. 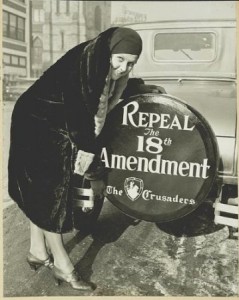 As always, for the article, I tried to fuse equal amounts of theory, fact and narrative to create a cohesive, entertaining and accessible story. I hope I succeeded. Two colorful new characters emerged: Henry Ramos and Jack Sheehan. Polar opposites but very interesting – and definite contributors to the culture of New Orleans.

This is what it took to write the article (and I am leaning on the conservative side):

Five scholarly articles. Four books. Three vintage magazines. One documentary and 342 archival newspaper articles – and I found and read them all!

The majority of my research came from primary sources – I always feel better going straight to the source and then formulating my own take on it based on what I find.

I read all of the local newspapers (as well as some from other states) at that time: the New Orleans States, the Item, and the Times-Picayune, but 90% of the time the Times-Picayune was much funnier and I ended up quoting it the most.

Piecing together an outline was trickier than I thought – the Acts, Laws, Amendments, etc. were very confusing. No wonder there was so much “liberal interpretation” of the law at the time. Every day people flocked to the newspapers to see what had changed and could they throw back a cold one after work tonight?

One interesting note – a few weeks ago Tanya Sanchez contacted me. She read about my work on the Mascot and was wondering if I could find an article about her great-great grandparents. We chatted via email and I discovered that she did her thesis on female bootleggers. Her excellent article “The Feminine Side of Bootlegging” was published in Louisiana History: The Journal of the Louisiana Historical Association in 2000. Funny how timing works sometime!

So here is my gift. John Haffner and I pieced together a brief outline laying out the dates and explanations of some of the laws regarding Prohibition. Enjoy!

*unfortunately my research on the Sunday Law, the Gay-Shattuck Law, and the Selective Service Act had to be cut from the article. Just could not squeeze it in. Maybe next time…

December 18, 1917 – The 18th Amendment clears Congress, is submitted to the states for ratification. It bans the “manufacture, sale, or transportation of intoxicating liquors…for beverage purposes” and authorizes Congress to legislate accordingly to define and enforce it.

November 18, 1918 – Congress passes the temporary Wartime Prohibition Act. It bans the sale of alcoholic beverages having an alcohol content of greater than 2.75%. It was ostensibly intended to save grain for the war effort, but was passed after the armistice was signed on November 11, 1918. (It’s passed before ratification of the Eighteenth Amendment). 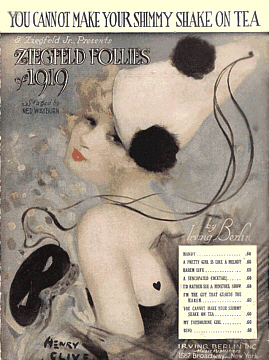 Sheet Music for anti-prohibition song "You Cannot Make Your Shimmy Shake on Tea."

January 16, 1919 – The 18th Amendment is ratified by the requisite 36 states. It is scheduled to go into effect one year hence. People start stockpiling booze!

July 1, 1919 – The Wartime Prohibition Act takes effect. Sale of 2.75% and higher alcohol content beverages is now illegal. (However according to Joy Jackson, some IRS agents say they will enforce down to 0.5%, implying that the Wartime Act was being enforced by the terms of the not-yet-passed Volstead Act.)

Title 2 implemented national prohibition broadly, effective February 1, 1920, including providing that “no person shall manufacture, sell, barter, transport, import, export, deliver, or furnish any intoxicating liquor except as authorized by this act.” It defined intoxicating liquor as any beverage containing more than 0.5% alcohol by volume. The act did not specifically prohibit the personal consumption of intoxicating liquors – you could drink alcohol, you just could not buy it – but did place myriad restrictions on public and private use of it. An additional Title regulated alcohol for medical and scientific use.

November 1919 – U.S. District Court judge in New Orleans, Judge Rufus Foster, finds legal fault with the Wartime Prohibition Act and enjoins its enforcement. New Orleanians celebrates; they want him to run for president of the Untied States.  A week later the Circuit Court lifts the injunction and so enforcement is back on. Damn.

February 1, 1920 – Volstead Act effective date according to the law’s text….but really, it was effective 14 days earlier.

November 1921 – Louisiana enacts the Hood Act (it passes by one vote), putting Prohibition into LA state law. The act is named after the state senator who introduced it, T.L. Hood of Ouachita Parish.

1920 to 1933 – The Prohibition Era; the Roaring 20s; the beginning of the Great Depression. Slowly, national opinion turns against Prohibition. 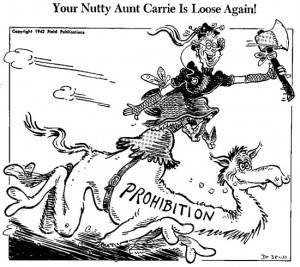 March 22, 1933 – Newly elected President Franklin Roosevelt signs the Cullen-Harrison Act into law.  It legalizes beverages with up to 3.2% alcohol content. Beer is back!

April 7, 1933 – The Cullen-Harrison Act takes effect; 3.2% beer is legal again under federal law but not yet in Louisiana under state law. 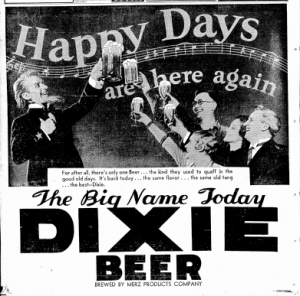 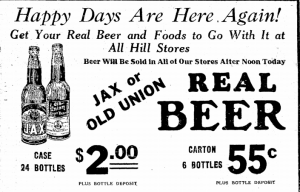 December 5, 1933 – The 21st Amendment is ratified. This is the day Prohibition “ends” although, technically it has not taken effect yet. Whiskey, gin, and rum flow!

December 15, 1933 – The 21st Amendment officially takes effect, repealing the 18th Amendment, making the Volstead Act unconstitutional, passing alcohol regulation back to the states – and alcoholic joy back to the people!