My lecture on Prohibition went well!  Here is the link to the video that the Old U.S. Mint shot. It’s divided into 5 sections with a brief description of each one.

Things I have learned – watch the “ums” (where did they come from?), be careful of the Freudian Slips, and I need to seriously rethink my hair part. And I called my pianist (and longtime friend) the wrong name – TWICE! How the hell did that happen?

But, all in all I think it went well.

We had a great turnout – the museum counted about 175. It was standing-room only – my largest crowd yet. 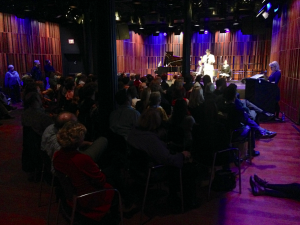 The drinks from Old New Orleans Rum were FANTASTIC (and incredibly strong). I warned everyone and so did Jason mixing them up – but whoa – some tasty concoctions. But I was so pleased because I felt like it added to the theme and I fought to have prohibition-style drinks instead of the usual beer and wine. Most importantly, everyone loved and enjoyed them.

Dickie and Frilot highly approve of the rum drinks!

My readers, Mikko, Veronica Russell, and Andrew Ward, once again exceeded all expectations! 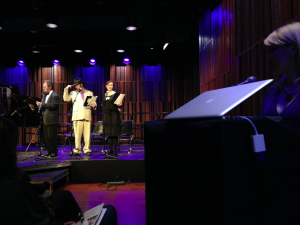 Trixie Minx, once again, combined sexiness and humor – something she excels in. 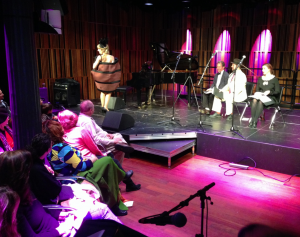 No major glitches. Danny who does my lights and sound is a total pro and awesome guy.

And the feedback and compliments I got were lovely and heartwarming.

It’s funny, I was talking about this with friends… I think people would be amazed to discover how MUCH preparation and how LITTLE rehearsal goes into the lecture. The amount of time I spend writing the script, doing slideshows, marketing, programs, music, lights, etc. is ungodly. UNGODLY. Weeks. Months. 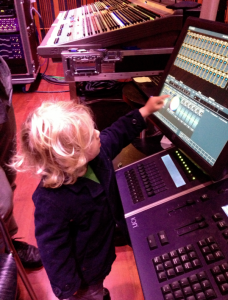 Louis B. makes sure my lights are working correctly

But rehearsal… We meet the day of, do a run through of any scene that requires more than one reader, run through special lighting. And that’s it. Personally, I can’t rehearse – it makes me too nervous. I just bullet point an outline (with light cues, photo, speeches) and go for it.

This time we added a sing-along. I have so many people to thank for that. I wanted the Sammy Edwards “No Beer, No Work” song to be performed. The No Beer No Work movement was a HUGE crusade and I am amazed it has never really been written about. I had originally viewed it as having the Valparaiso Men’s Chorus sing it, but was so busy with other things I never really got a chance to pitch it so I decided to trash it. But about a week before it started crawling in my brain how much I wanted to do it – so I decided to enlist a few friends. First, I had to find a piano player. I asked Rick English (aka Dickie) if he could do it and he agreed! I sent him the sheet music and then sent an email out to some rollergirls friends asking if  they could stand up and sing during the lecture. They loved the idea and agreed… Rollergirls ROCK! 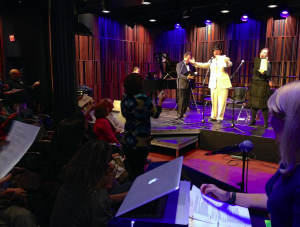 It was fun seeing people Bea did not recruit jump up and join in song!

The smartest thing I did was put Beatrix sKiddo (aka Sherri) in charge as music director. She took the song to her voice teacher, who played it on the piano and recorded Bea singing it. She then emailed it to everyone (none us had actually heard the song). She also came up with the idea of printing up 1/4 size sheets with the lyrics to insert in the programs, which she also took on by herself. And then during the reception, she recruited even more singers – most made up from Big Easy Rollergirls, 610 Stompers, Krewe of the Rollin’ Elvi, and NOLA Bulls. Sometimes I would just point to someone and say I wanted them to sing and Bea would be off, lyric sheet in hand.

You can see Bea raise her arms and rally!

Meanwhile, Dickie was learning the song. We agreed that Andrew would be the main voice while everyone sang chorus. Dickie arrived at 5 (an hour before the reception) we played the song for the readers about 3 times while Mikko and Andrew worked on some new “additions.” At 5:30 some of the rollergirls came and ran through it twice. And that was it! I kept telling them I did not want it to be perfect, I wanted it to be more rowdy and boisterous. Jump up, arms pumping – really try to convey the labor campaign. And I think they did it marvelously.

Here is a LITTLE VIDEO my friend Christy Soto shot during the song.

Here is a little photo album from the Louisiana State Museum.

I had the idea of Trixie Minx dancing in a barrel but really nothing beyond that. When I dropped the costume off to her, she just casually waved her hand at me, “I got this, girl.”

And of course she did. She maybe ran through her song twice before the reception. Glove reveal here. Glove reveal here. One little hiccup was Mikko’s wife and child were in the back dressing room hanging out with Louis watching a video and by the time they were ready to come in all of the seats were taken. Danny pulled another chair out for me and placed it near the stage facing Mikko. This was exactly the spot where Trixie had planned to remove her bra – and I placed a toddler there! I realized it as soon as she started to dance. We laughed about it later and she altered her dance and no one was the wiser.

But the good news is I surround myself with pros who feel passionate about the project. I send them the script a few days in advance with all of the lighting cues, photo cues, and speeches. I send the readers notes on background of the character and how I envision them reading it. And they RUN WITH IT!

I’ve told them this before but they are my security blanket. I always feel calm around them – I know if I screw up they’ve got my back and will be spectacular. I am such awe of their talent and their generosity.

So… I hope y’all enjoy the video on Prohibition (and learn something too!).

Once again – thank you to everyone who came out and everyone who lent their time to help me bring it to realty. Especially: John Haffner, Glenn May, Scott Frilot, Bill Asher, and Kathryn Hobgood Ray *Trixie!*