Well, ever since the first time I went to the Tennessee Williams Festival (I think back in 2000) I have wanted to be on a panel – and now it is happening!

I am very proud and incredibly excited to be on 3 panels this year. My book Hope and New Orleans: A History of Crescent City Street Names will also be on sale at the festival through the Garden District Book Shop.

There are so many great panels and I am so excited to not only participate but to also attend many of the other amazing panels, classes, theatrical performances, cocktail tastings, and lectures.

Here is my schedule:

Here is a guide to the Tennessee Williams Festival Program.

HOPE TO SEE YOU THERE!

To quote Tennessee – Enthusiasm is the most important thing in life. 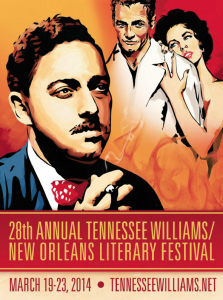