There is Nothing Discrete About a Chainsaw #1

On Martin Luther King Jr. Day, my friend John and I took my dogs to Holy Cross for a romp and adventure. 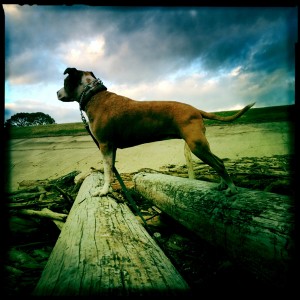 Glorious Fannie unaware some of these logs will one day be in her home.

We go there a few times a month as it is filled with diverting smells and appetizing driftwood courtesy of the Mississippi River. The chance of my dogs needing a bath afterward is fairly high, but the chances of them being content and sleeping for 36 hours afterward is even higher.

The river has been really low lately and we walked along the mud, fished Fannie out of the river, and led Django to spots that we believed had the most delectable pieces of driftwood.

I have been toying with the idea of getting a side table made out of a log for quite awhile now, but when I stood on this one tree trunk that had made its way down the Mississippi and lodged itself almost ceremonially among the others, I decided I had found the piece I wanted.

One of the great things about John is that he is game for anything. Anything. So when I mentioned it he immediately told me he was on board. Not knowing how long we’d have this tide, I started texting John the next morning asking him if he could get a hold of chainsaw for me by the time I got off of work. Maybe ask Paul, who also has a collection of machetes, builds scooters, brews his own beer, and makes flan. Yup, Paul had one. I made arrangements with my boss to get off early because I knew I would be working against the light. 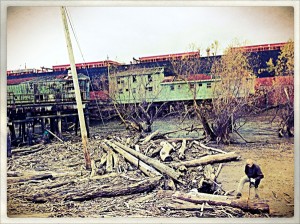 The grand scope of it all

After changing, John met me at home and we drove over to Holy Cross. I had big ambitions. Cut about 6 logs – enough to make a couple side tables for me and some for friends. I’ve handled a chainsaw before, cutting firewood growing up, and I was convinced it would be fairly quick in-and-out job. 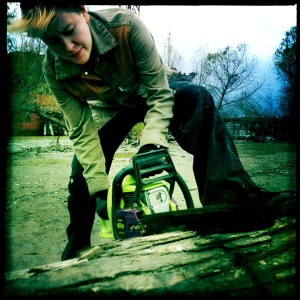 Cutting logs with the Donald Trump comb over.

I didn’t consider that the chainsaw was smaller than I was used to and that the log was 4x the size of what I was used to, or that the log was wet and therefore more heavy and surely over 125 lbs, or that it was getting dark, and it was possibly illegal what we were doing. Just minor details. And getting the log up the steep levee once we finished cutting it? Never entered my mind.

The Facts of the Case:

2.5 hours is how long it took us to cut and transport two logs to John’s car.

Once is how many times the cops stopped us.

45 degrees is the rough angle of the levee.

150 lbs is my best guess on how much the log weighed.

90% is the amount John cut due to me not bringing a wrap for my wrist.

61 is the age of the man who offered to help us lift the first log.

3 is the number of high fives and hugs we got from the kids afterward. 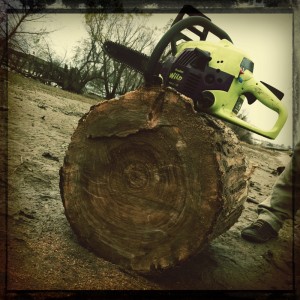 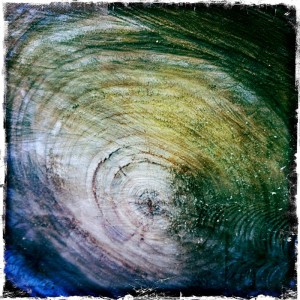 A view from the side

After John and I sawed the first piece and laboriously rolled it up the hill a man from a nearby house shouted out and asked us if we needed any help.

I told him thanks, but we had it under control. Then we actually tried to lift it into John’s car…  John went down and knocked on the man’s door and he immediately left his television and came over to help us. The two of them applied the appropriate brawn and lifted it up without any problems.

After realizing how arduous the first log was, John and I agreed to just start on the second log – but then we both became fairly involved in it and stayed until we finished, working that chainsaw by only the lights of the nearby ships. Rolling the second log up was much more difficult than the first, not only because we were both physically exhausted and it was even heavier than the first one, but because it had a large knot on its side. With several heaves, though, we got it atop the levee and over to the car.

There was no way the two of us were going to be able to lift it though. John went back down to the house but a lady told him that her nephew Derrick just drove the man to the bus stop, but when he got back in ten minutes, she would send him to help us. John and I settled in by the side of the car to wait when a young boy on a scooter came by and started asking me questions – what was I doing, was that a real chainsaw, what was I making? A couple of minutes later, two other little kids showed up, a boy and a girl, and informed us that Derrick wouldn’t be back soon so their grandmother sent them to help us. The boy we had been talking to threw down his scooter and got very excited to help us as well. They all grabbed at the log, insisting that they were strong enough, and informed me that they could even do it without me or John.  Not wanting to squash their enthusiasm, I told them to wait just a minute. I lined them up – “All right, let me feel your muscles.” They all flexed and I felt each of their arms, oohing and ahhing over their magnificent strength. Then the boy with the scooter wanted to feel my arms. “Sure,” I told him, flexing my arm. I thought at least he’d give me some credit, but he gave my bicep a squeeze and then gave me a very unimpressed “hmmphf.” I didn’t let this cloud my focus.

Still not convinced, and definitely not wanting any of the kids to get hurt, I conceded to John’s “why not” look and the five of us crowded around the log and on the count of three, hoisted it into the back of John’s truck. Success! The kids were all so excited and immediately started hugging me and John and giving us high-fives. 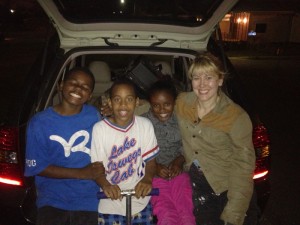 They then posed with me in front of the logs (which you can’t really see) and I promised to bring them copies of the photo. With that, we headed home, filthy and weary but with two badass sections of tree trunk in tow (plus a third we found that didn’t need to be cut).  Back at the house, it took Glenn’s hand truck to get the logs out of the back of John’s truck and through to my back porch.

On to the next step. 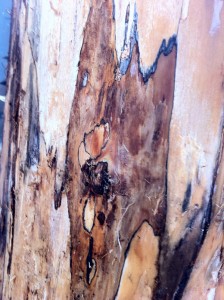 The bark on the side of the log that had been in the mud came off with only a crowbar, but the bark on the drier side was much more difficult so I incorporated a hammer as well. It’s difficult to be delicate with a crowbar. 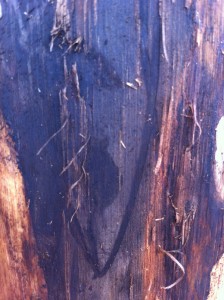 I can already tell this stump is going to be a beauty and I have named him “Fish” after the fish pattern in the grain that I discovered about halfway through the bark removal process. I have named the other one “Bump” because of the large knot on his side.

My plan is once I remove the bark, to let it dry (this could take weeks) and then sand it, level it (I am probably going to have to get someone to do that) and then perhaps stain and coat it. There has always been something about wood that I love – I can’t really describe it. It is calming just sitting on my back porch for hours and removing bark. Beautiful day, animals about me, my mind able to relax and wander… And soon I will have a lovely new piece of furniture with another great memory… And hopefully, eventually I will have some for my friends as well.

I am investing in a chainsaw of my own.