This week I uploaded Mascot covers and illustrations to my facebook page so the public relations director of the Cabildo can choose which one he wants to use for their press release, event page, etc. for my lecture on May 10th.  I did not add any descriptions, but decided this would be the place to put some of the “juicy” unknown ones. The theme of this post is “Frail and Strong Women.” “Frail” women were not called that for their delicate nature, but for their “frail” moral character – prostitutes, lesbians, adulteresses, alcoholics, etc.

Here are just a few odd samples of “small” stories in the Mascot. 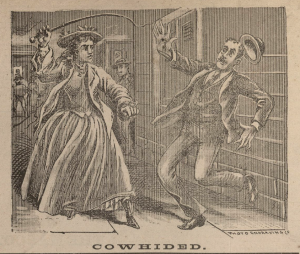 The Mascot delights to hear of girls taking their own part and inflicting summary and coudign punishment upon blackguards that have insulted them. If girls took the law into their own hands more frequently than they do, blackguards would profit from the example set them and girls would be free from insult when they walk the streets. There are a lot of fellows who stand on Canal street ogling, eyeing and insulting every girl that passes, who would benefit considerably if some brave girls would cowhide two or three of them.

Apparently, a John Geary of the Seventh District, a well-known “masher” or “dude” (slang for a “player”) made a remark about Marie Gross. Her sister Delia was so enraged that she armed herself with a “stout whip” and waited for him to pass and when he did she wailed on him.

A number of people were attracted by Geary’s shouts and ran out to try to save him from the justly infuriated damsels, but the neighbors’ entreaties to desist only had the effect of causing the girls to ply their whip with greater vigor. Geary was covered with welts and bruises from head to toe.

The sisters were charged with assault and battery. Marie Gross filed an affidavit against Geary for slander. 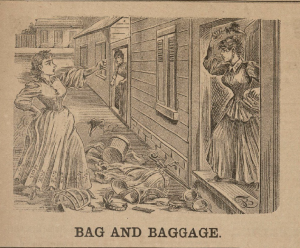 They had exchanged little feminine confidences, told one another their love secrets, together torn to tatters the reputations of their neighbors, in short, they were as intimate as two women ever can possibly be.

“Molly” owned the lease to the house and the two women lived together quietly like “two turtle doves” until “Cupid entered the household” in the form of a young milkman and he brought “jealousy as his companion.”

Every morning their milk was brought to the door by an old man; one day a good-looking young man took his place; both noted his handsome, healthy appearance, both fell in love with him, and thereafter they had a race every morning to get up early and take the milk from the young man’s hands. After a few days of silent rivalry, they fell out about the matter and had a stormy time. Each accused the other of flirting with the dispenser of the lactral fluid; words were succeeded by blows and scratching.

Molly won the fight and threw the other woman out of her house as well as her belongings: petticoats, chemises, bustles, shoes, stockings, hairpins, hats, bodices, skirts, umbrellas, parasols, false teeth, and many other articles of feminine attire hurled through the air. 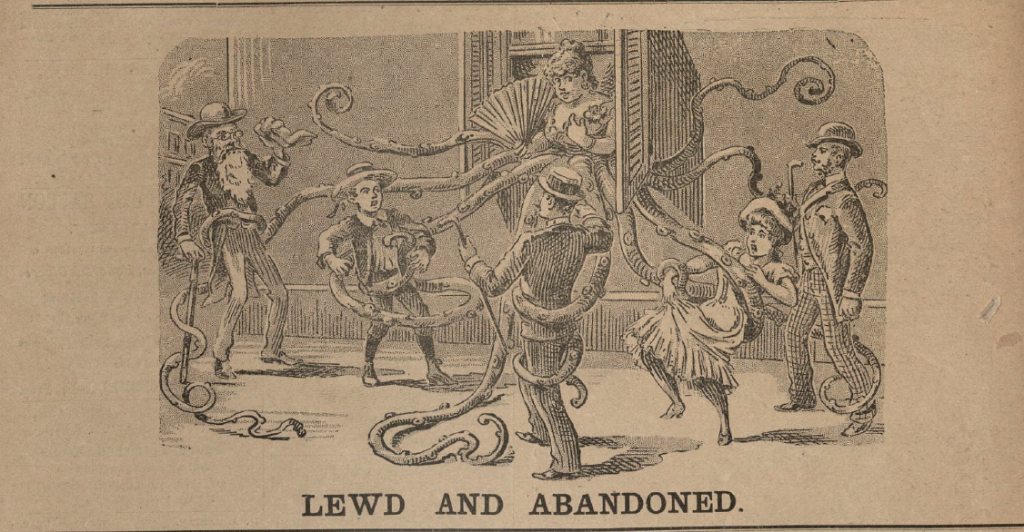 Emma Johnson was a notorious African American madam who owned a brothel on 20 Gasquet Street in an area of houses that are the receptacles of ordure, flushed by no sewerage system, the effluvium of which mingles with the atmosphere and, on misty days, assails the olfactories of the people. Beneath the iron plates which bridge the gutters stagnates a mass of foetid putridity, which is not removed, but simply hid and ignored.

One Saturday night, Officer Flynn was passing by her business when he noticed Johnson sitting at her open window thus violating the ordinance compelling such characters to keep their blinds drawn. Flynn ordered her to shut her blinds which Johnson retaliated by calling him “vile names.” He left to deal with two drunk men on the corner and as he was returning noticed Johnson calling to several men on the street, all who entered her establishment. He arrested her – immune to threats, bribery, and escape attempts. Johnson was fined $20. 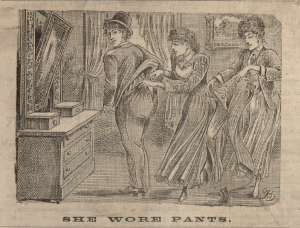 It is a strange things, but yet a truth, that many girls wish they were men. They often don male attire and put on a fierce false mustache on their upper lip and feel that they are the most attractive dudes that ever put on a pair of pants. Men also at times masquerade as women. Some horrid stories are current of things who at times are dressed as men, but who at night are to be found at a house on Lafayette strreet attired as fashionably dressed women. Their conduct is said to be disgusting in the extreme and the MASCOT will in a short time give a full expose of the dirty methods carried on by the wolves in sheep’s clothing.

Some women are so gifted with powers so masculine as to make them more than half men. The trial of the *Mitchell girl in Memphis* had done much to show that women in their dispositions often are more masculine than feminine – they might be termed neuter. In New Orleans during Mardi Gras girls often masqueraded as boys, but why should they do so at other times seems strange. Yet a possessing young lady who lives in Carrollton, named Zelda Hartman, has been of late putting on pants and going among the young girls making fools of them. It is said she has learned some queer secrets while masquerading as a boy. Some fun may be expected, as Zelda is accused of having talked some scandal about a lady, and the matter will be brought into court.

* Interesting side note, I did some research and discovered that the year before, in 1892, an Alice Mitchell cut the throat of Freda Ward with a razor, killing her because she had broken off of their engagement. The trial made headlines across the country. Mitchell and Ward had planned to marry, with Mitchell disguising herself as a man. When Ward’s sister found out she stopped their planned elopement sending Mitchell into total despair. One day, Ward and her sister Josephine where riding in a carriage when Mitchell leapt into the carriage, pulled a razor from the folds of her dress and slit Ward’s throat. At Mitchell’s trial she declared that “All I wanted to do was to cut her so as to kill. I loved her better than any one in the world.” She intended to kill Ward and then herself, but Josephine struck Mitchell over the head with her umbrella. Mitchell was later declared insane.