A Plague of Prostitutes 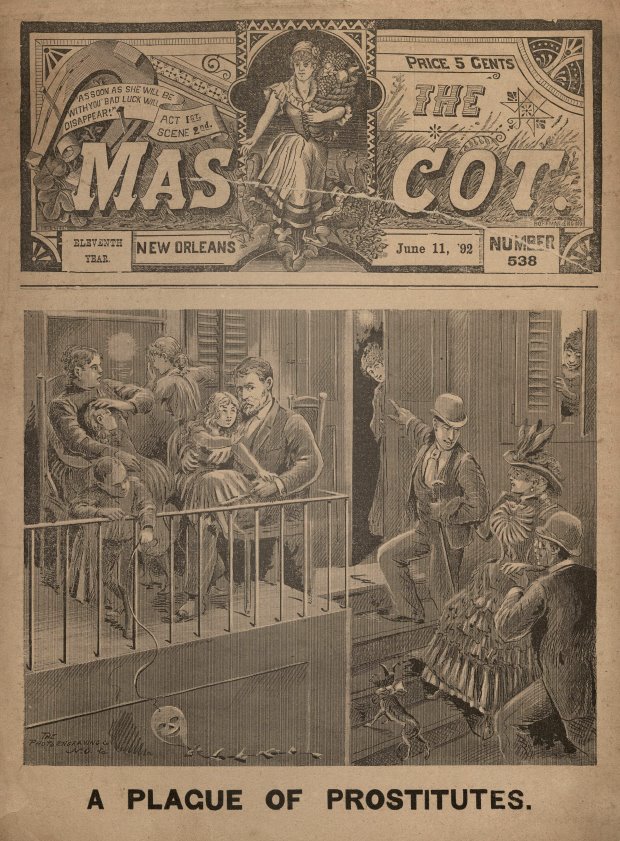 Some scholars have written that the “Mascot” was the first newspaper to suggest a legalized area for prostitution. While I have not been able to completely verify this (that would require checking all of the other newspapers), this is the article that scholars are referring to. The “Mascot” suggests that having a district devoted entirely to prostitution would be useful not only because sex, like gambling, is an evil that can not be cured, but also because it would cut down on disease, stabilize the housing market, and save many women from careers as “fallen women,” since having to register as a prostitute would ultimately shame them. This was published roughly six years before Storyville began.

A PLAGUE OF PROSTITUTES

The last grand jury in its report, recommended that gambling houses should be licensed, basing their recommendation upon the well-known fact that gambling can not be suppressed. Their action is by no means an endorsement of the speculative vice, the evil effect of which they clearly recognize. On the contrary, the deprecate the spread of the evil and only suggest licensing as a means of curtailing it. Gambling is an offence against the law of the State; consequently the municipal authorities are unable, by ordinance or otherwise, to legalize or license it. The administration of Mayor Guillotte cut the Gordian knot by collecting from the respectable gamblers a monthly levy, the proceeds of which were devoted to building the Shakspeare almshouse. By this means gambling was confined to the places of those who paid their assessment, for those who did not were promptly punished. The recognized ones aided the police in detecting irregular gamesters, so the system worked well.

However, the Mayor though working for the good of the city, was himself incurring serious risk by his action, which could have resulted in his impeachment had thirty tax-payers been so minded. So the system fell into disuse, partly owning to the clamor of some fanatics. The abandonment of the assessment system, and the consequent prosecution of the gamblers, caused many of those who conducted honest establishments to leave for pastures new, but for every one who departed, a dozen sprung up in his place. Nearly every corner doggery started a game, which an occasional present of a few dollars to the policeman on the beat secured from molestation. The latter state was worse and is now worse than the first. Instead of the gambling houses being isolated and curtailed, they have been allowed to spread all over the city. In consequence, every boy and young man is exposed to temptation, to become a gambler and be cheated at the same time. These facts the grand jury recognized and consequently recommended a licensing system.

While dealing with the question, however, they would have done well to consider another evil which is far greater, more widespread and more detrimental to the community, the social evil which afflicts New Orleans as it afflicts all large cities. Like gambling, it is ineradicable, yet – if handled properly- it can be curtailed. Against houses of ill-fame, as such, the MASCOT makes no crusade so long as they are conducted in a decorous manner and are not located in respectable neighborhoods, for they are a necessary evil. The subject is a delicate one to handle, but it must be admitted that such places are useful in ministering to the passions of men who otherwise would be tempted to seduce the young ladies of their acquaintance. But, whatever good they may unconsciously effect thus by their existence, would be more than offset were they allowed to flourish in any and every part of the city. It is a notorious fact, well-known to the police, that of late such establishments have sprung up in many neighborhoods hitherto free from them, thus obtruding the evil under the eyes of growing girls of respectable family.

Besides, under the present system, a great number of the demi-monde are diseased, yet ply their trade just the same. The consequence is that growing boys and young men contract contagious diseases of a nature which can be suppressed, but which remain in the blood. That this is true can be seen by the advertising columns of the daily papers, in which appear many advertisements of patent medicines which purport to cure such diseases. Were only the young men to be diseased and enfeebled, the injury to the race would be deplorable enough, but the evil consequences spread further, for when they marry, those affections of the blood are transmitted to their children, innocent inheritors of the curse.

Young men can no more be made continent by legislation than gamblers be forced to cease gambling, yet the evil results of their intercourse with fallen women can be minimized by State regulation of the social evil, as is done in France, Belgium, Germany and the garrison towns of Great Britain. In those places, any woman desiring to pursue a life of shame must register and obtain a permit from the civil authorities, which is granted her after a medical officer has certified that she is in perfect health. Her residence is registered and she can ply her traffic in no other house; should she remove, she must notify the authorities of her change of address. Once a week, she must present herself to the medical officer for an examination. If he finds her free from disease, her permit is endorsed by him and is good for the ensuing week. If unwell, the [woman] is sent to the hospital and kept there until cured.

Should her place of residence be in a respectable neighborhood, the official refuses to grant her a permit until she removes into one of the streets recognized as the haunt of such women. Any public woman who does not register, fails to attend the medical examination, or does not notify the authorities of her change of address is sent to prison. The system may appear harsh and also an endorsement of immorality. On the contrary, it is beneficent and keeps down vice. The weekly medical examination prevents the spread of horrible diseases. The condition as to residence keeps respectable neighborhoods from pollution. The necessity of registration as a fallen women deters thousand of girls from a life of shame.

Why should not such a system be adopted in New Orleans? The social evil is rampant in our midst and all are aware of it. Houses of assignation and ill-fame, like mushrooms, are springing up all over the city. Which of our readers does not know of some young women who has embraced a life of shame, which she would never have done had she been obliged to register? Who does not know some young man who had become a physical wreck in consequence of a disease contracted in one of the brothels of the city? The enactment of law similar to those of the places before she mentioned would deter the daughters of the city from sin, would protect the health of the young men, and would force all the immoral women to take up their residence in one locality.

Upon the front page of this issue an artist has represented the plight in which many of the residents of this city have found themselves. Many a man has purchased a house and lot in a quiet street, hoping to there lead a life of peace and happiness with his wife and family, but has woke up some fine morning to find the next house occupied by disreputable people, who carouse, receive male visitors, hammer the piano all night, use obscene language and convert his paradise into a hell. In such a case, the injured man can do nothing. The council is powerless to interfere so long as the obnoxious people own their house or the landlord of it refuses to eject them. All that remains to the unhappy man whose peace has been destroyed by them, is to sell out a sacrifice and remove elsewhere, there perhaps to undergo the same experience. The whole subject is important, and the MASCOT commends it to the attention of the legislature.