For the summer months, I am starting a new weekly blog: Mascot Mondays. Every Monday during the summer (at least until school starts) I will share an article from the Mascot. Yeah, I know today is Wednesday, so you can say I am either late for this week or early for next.

This week’s article is from November 15, 1890. Like the previous article I posted, “The Plague of Prostitutes,” this article is fairly revolutionary. As I mentioned in a previous blog, The Mascot has been credited as being the first local paper to advocate a regulated district for prostitution. Similarly, today’s article is considered one of the first to report on jazz, or at least, the very early roots of New Orleans-style jazz. Not that it is complimentary, but in taking a break from its reporting on political activity to report on musical happenings, the Mascot does offer engaging insight on jazz’s emerging popularity (or its growing nuisance). The article also includes, according to Al Rose’s “Storyville, New Orleans,” the earliest known illustration of jazz.

The article features two prominent New Orleans characters of the day, Eugene Robinson and Edgar Farrar.  Robinson’s “Eugene Robinson’s Museum and Theater” was on Canal Street (#126, I believe). He also owned some other “attractions” on a riverboat, which supposedly a young Louis Armstrong performed on.

Edgar Farrar was a lawyer and political activist. He was chairman of a committee to reform the municipal government of New Orleans, and assisted in modernizing the sewer and water systems of New Orleans.  He was also selected by Paul Tulane to be one of the first trustees of the fund set up to establish Tulane University.

Another great article to read regarding this topic that draws heavily from this article is “For Godsake Stop!”: Improvised Music in the streets of New Orleans, ca. 1890 by Vincent J. Panetta.

Oh, if we only knew then what we know now. How wonderful would it have been to hear this “racket” and know you were witnessing something that would alter music forever? 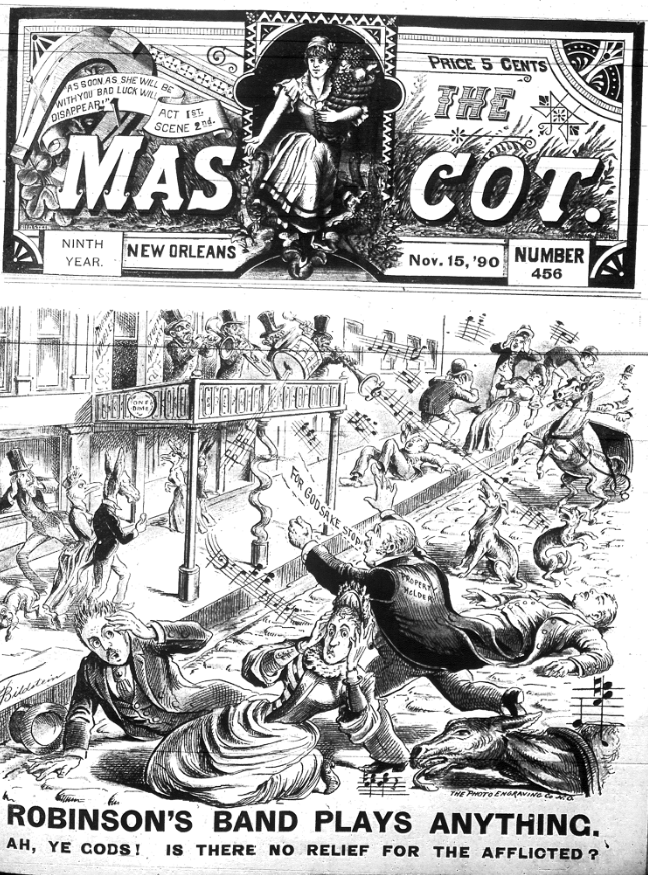 Ah, ye Gods! Is There No Relief for The Afflicted?

In the language of a real poet, “tis a burning tale of woe.” We have passed through a long, fly summer; we have sniffed the effluvia from the variegated scum that shone so brightly under the gentle summer sun from the street gutters. We have passed through a Congressional election and nary a calamity have we struck or have we been struck by, but after all these experiences and safe delivery we have at last been visited by a sad affliction. Oh, listen Mr. Robinson, to our tale of woe. Several “coons” armed with pieces of brass have handed together for what personal good we are unable to say, except that it be for two dollars a week and glue, but we are able to swear that if their object was to inflict torture upon this suffering community and everything else in it, they are doing right well in their particular line. If that band of wind-jammers have started out on a crusade against sinners – brother and sisters let us pray. Out time here is uncertain and if the enemy persues [pursues] us we must perish. No visitation yet on earth could compare with the awful affliction which now rests upon us. A man amongst us and that man’s name is Eugene Robinson. From whence he came no one knows, but in the language of the scriptures he got here all in a heap. This man Robinson is not old man Crusoe Robinson, but another Robinson. He came here with a monkey and a blue parrot as his companions and he remained quiet. The town knew him not, but a nigger brass band betrayed him and as many as know him now call him bad names.

The mafia seems to remain quiet on this subject and the suffering goes on. Horses fall in the streets, street-car mules moan in agony,  drivers faint, stores close until the hurricane calms, the greatest minds in the city go wrong. Oh where, oh where, is Edgar Farrar and his little committee? That band has completely dazed the population. That band has completely dazed the population. It would make Rube Burrows throw up both hands. That band placed at the head of the Limerick Guards playing Annie Laurie could free Ireland. It has stopped street walking and shopping. It keeps men home at night and no man will trust himself on Canal street with “a bit too much” for fear he might get ‘em. The band is always there and it is always playing. The band never eats. Robinson does not believe in a dinner hour. They must live on the public woe. They seem to be living, too, for they continue to put it on as thick as ever. We often wish that we were little fishes, that we could live under the water as well as on the earth. It would be no use to be a little bird because the vibration would take the feathers off of us. This is all we have to say about that infernal band.

We will now visit the museum. There we see a trough filled with water and several miniature steamboats floating about. We then visit the grand art gallery where we see clippings from the pictorial weeklies. There is also to be seen on this floor the same blue parrot and monkey that accompanied Robinson and a real cow. This ends the museum and as one passes out he wonders why he did not go down to a Chartres street bird store when he museumically inclined. The smallest bird store in town is a far better museum than is Robinson’s. Robinson is certainly a man of great nerve to open such a place and call it a museum, to say nothing of that band. Our artist presents on the first page to-day an illustration of the effects of that band and the attention of the reader is called to it. Look the picture over carefully and you will be convinced that Robinson’s balcony serenade is enough to make the dead rise from the graves and take to the woods. It will surely happen that if that band continues many a widow will find her husband missing when she visits him next All Saint’s day. It will be no use to keep anybody’s grave green because its dollars to doughnuts that that the corpse will leave town at night. Oh, Robinson, weaken please.