A few months ago I was at Ricca’s looking for spare wood to make frames out of when I spotted a sign hanging from the rafters. It was in a corner of the store, high up, with scrap wood surrounding it. I asked to climb up to the rafters to get a better look but the staff would not let me. However, they did go up and measure it for me. I wrote down the measurements and then asked the owners for a price. They told me that the sign had been there since their grandfather opened the store in the 1950s. After some hmmming and hawing they gave me a price. A reasonable price. Trying to curb my natural impulses of immediate reaction, I went home and thought about it for a few days – and measured. And researched. 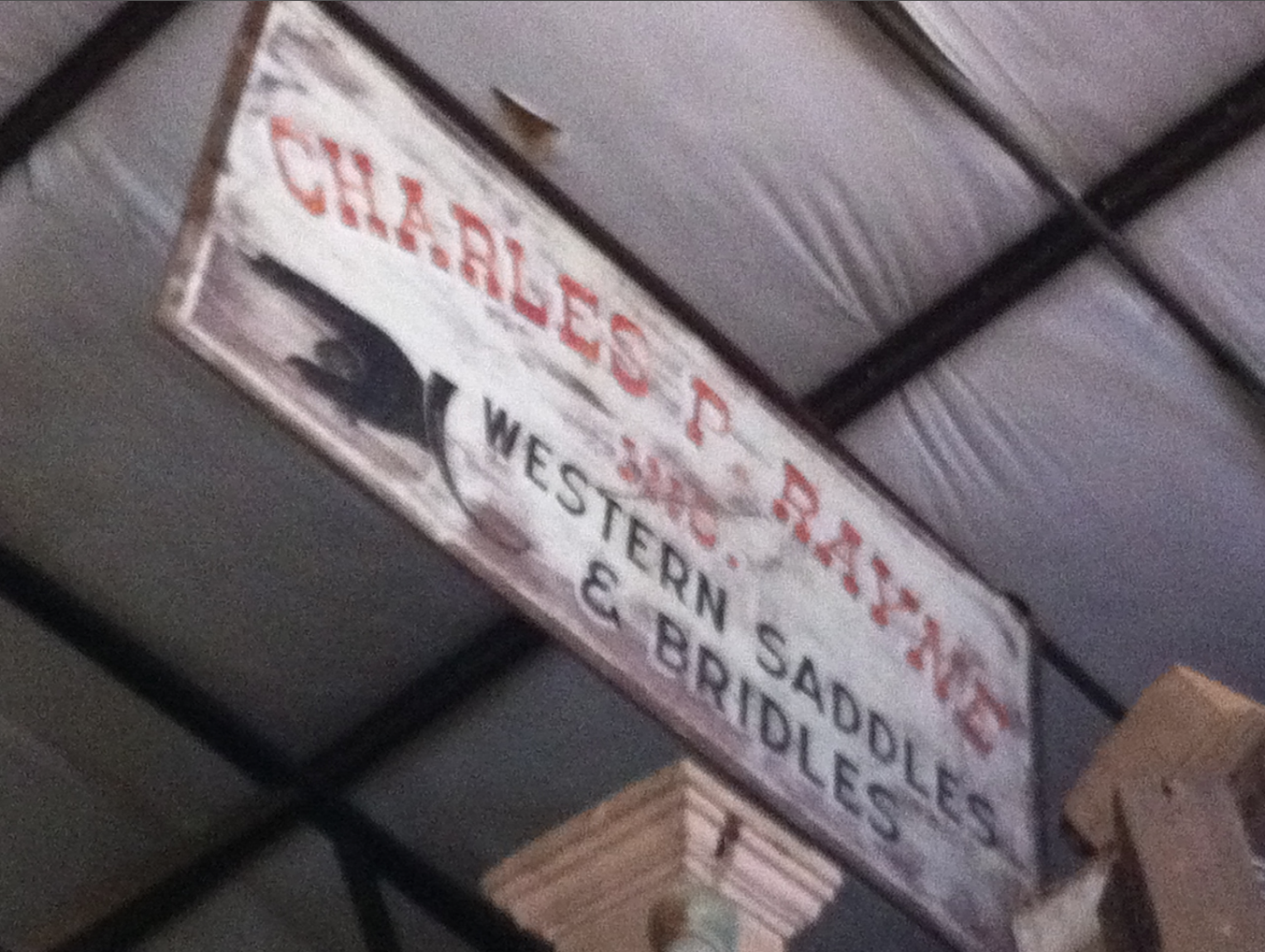 High up in the rafters

After just a little research (more to come, I plan on combing through some City Directories next time I hit the library) I discovered that the original hand-painted sign was from a 1930s New Orleans saddlery and harness store owned by a William J. Nunez, Jr. That pretty much sold me but the cincher was that it fit PERFECTLY on my kitchen wall.

My friend John went to pick it up for me in his SUV; they said it wasn’t heavy but there was no way it would fit in my compact car. Once he went back, the owner decided that he did not want to sell it – the sign had been hanging in their store moderately clandestine for some sixty-odd years. But John persevered, and soon the sign was in the back of his car and even sooner in my living room. It stayed on the floor for awhile until I was able to actual move it into place (had to move another piece).

The sign itself was wood, painted on both sides, and with metal brackets bolted to the edges. How to hang? 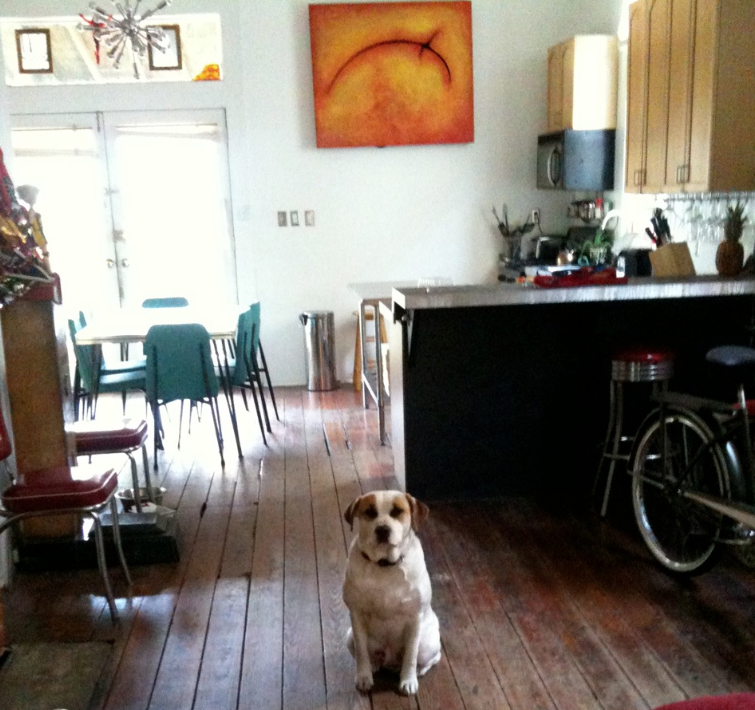 On Easter weekend I had some friends stay with me. I had a huge paper due and was pretty much invisible the entire time, except for a brief appearance on Sunday afternoon to watch the parade in the French Quarter and attend an Easter party. I was discussing the difficulties of hanging the sign with my friend Mike who was staying with me when he came up with the idea of hanging it from a curtain rod – like I had done with one of my other paintings. Perfect! 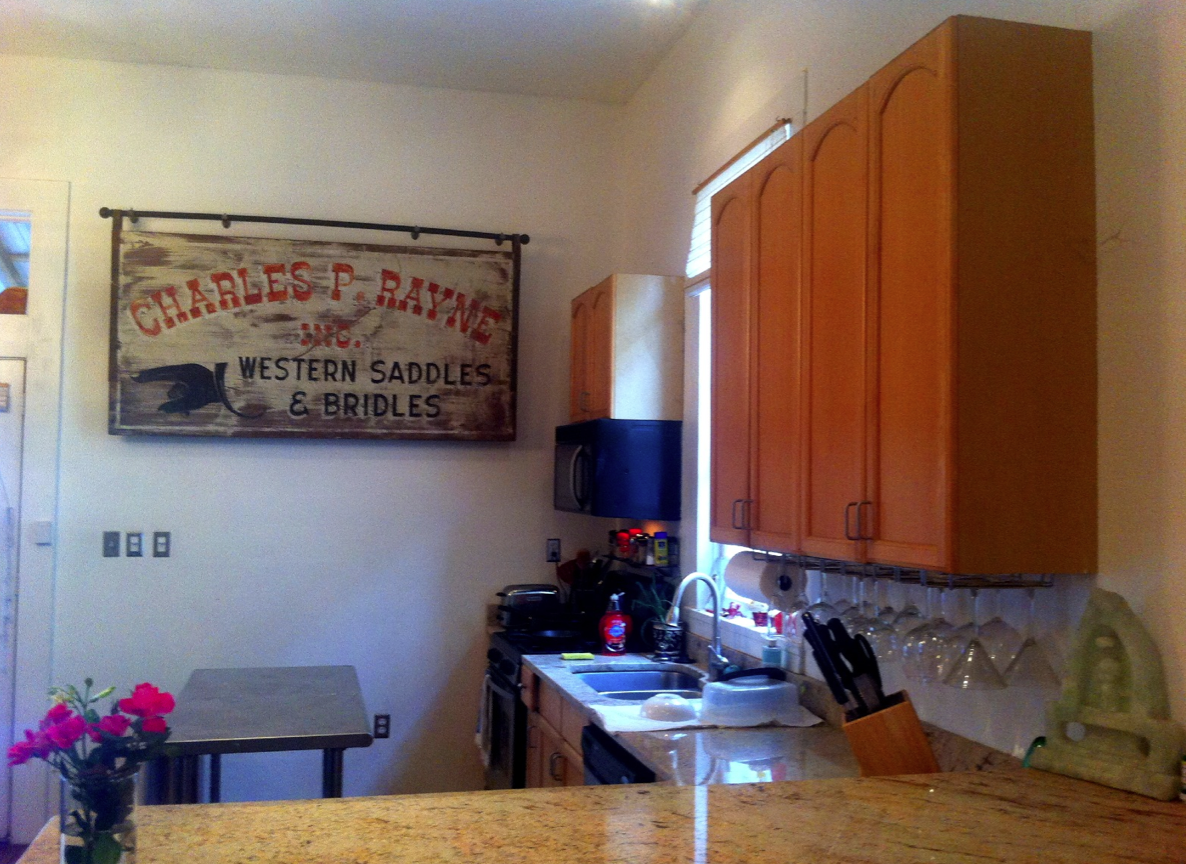 Mike and Glenn hung it for me, needing two brackets for the weight, and within a short time, my new sign hung on my kitchen wall – it is now the first thing one sees when they come into my house and it sets a completely different tone (much more serene than what was there before). Yes, it is slightly ironic since I am not a fan of horses, but I am always a fan of owning a piece of history. And yes, it will be left in my will to my good friend and horse rider extraordinaire Danan.

Now, to one day write about my vintage chalkboard from the old uptown NOCCA, my antique bingo machine, my retro vacuum cleaner and my chairs from the old Saenger Theater. One step at a time… And I still need to find a new couch!