Mascot Mondays #5 of 12: Friends in the Mascot Part One

One of the great things about my research involving the Mascot is that I have discovered friends’ relatives immortalized in their pages. Two I have confirmed and two I am waiting to confirm (they need to check their family tree).

Here is a little something about the first of my confirmed:  My friend Kathryn Hobgood Ray (a.k.a. Trixie) and her relative the infamous Colonel Edward S. Hobgood, partner to the famous bank robber Eugene Bunch. 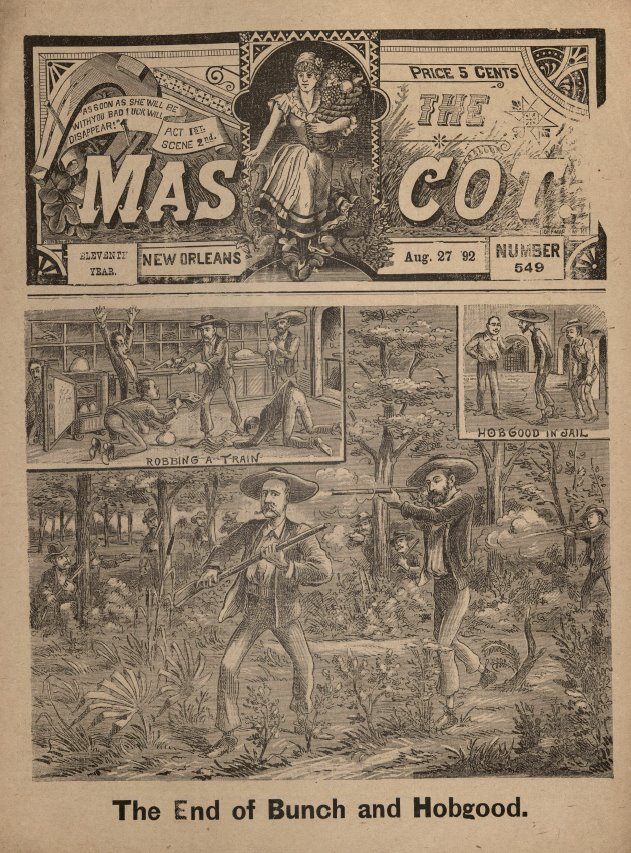 Eugene Bunch was born in Mississippi in 1841 and was well educated. The youngest of three, he was bright, advanced quickly in his studies, and served in the Civil War. A cultured man, he was once a teacher and newspaper editor. He also became a terrible drunkard, some believe as a result of the war. He moved to Texas, curtailed his drinking and there “lived in clover” as a city clerk in Gainesville. Discrepancies in his books became known, and he shook off the dust of the town and took to robbing trains. Bunch robbed trains in Mississippi, Louisiana, and Texas. Considered congenial, he had a gentlemanly way about reliving passengers of their money. Bunch would even tip his hat as he took ladies’ purses. Bunch’s career change paid off, and in one raid he and his gang made off with almost $30,000 in cash. In 1892, his gang took $20,000 from a train heist in New Orleans. The Southern Express Company hired the Pinkerton Detectives to hunt down Bunch and his gang, which included Colonel Hobgood.

A posse was formed, and Bunch took to Honey Island Swamp, an area that he was familiar with and that had aided him in the past. An excellent woodsman and hunter, it was said that Bunch knew every foot of ground in Tangipahoa Parish. He and his principal accomplice, Hobgood, were waiting in the “impenetrable” swamp for friends to bring them clothes and supplies. A couple members of his gang had been arrested a few days earlier; regardless, the men felt confident in their hiding place that was like a second home to Bunch. Pinkerton Detective Thomas Jackson, however, was a native of the parish and was just as friendly with the “jungles” of the swamps.

Perhaps it was that both of Bunch’s parents and his two siblings died of consumption and Bunch feared that the dreaded disease would also be his fate that lead to his audacious behavior, or maybe with the death of his entire immediate family, gone were any kind of moral parameters that often accompanied the power of familial guilt. Whatever Bunch’s reason, he swore that he would never be taken alive. Jackson knew this and the detective warned his posse that they were going after a most “desperate” man.

There are conflicting reports on the exact nature of the death of Bunch and capture of Hobgood on August 22, 1892. One states that always on the lookout, Bunch noticed a detective squatting in the bushes to relieve himself and shot at him, missing and drawing attention to himself whereupon he was brought to his end with a Winchester rifle. Another account states that the “noiseless” detectives snuck up on the chatty men, but Bunch noticed them and started to fire but was shot in the process. Another account (this one probably not true) was that once they realized that detectives were near, Hobgood shot him in the back of the head “Jessie James” style to try and get the $3,000 reward and claim his innocence of the various train robberies once his partner was buried in the ground. What is certain is that Bunch’s life ended that day in the swamp he so loved and that Hobgood was brought to the New Orleans parish prison where curious spectators and former victims came from three states to cast their eyes on the mysterious Colonel Hobgood. This is what the Mascot had to say about him:

He is an ungainly, regular hoosier, wearing high-water pants and with a casual drawl in his speech. When he made his appearance in the yard of the prison, the other prisoners amongst them whom are some tough characters, gathered about him, curious to see such a notorious character. Hobgod did not come up to their expectations, being very far removed in appearance from the dime novel hero who robs trains, marries an heiress and becomes a millionaire. He looked poor, both in finances and adipose. His pants shrunk away from his boots like a prudish old maid from a man. Being slightly knock-kneed does not improve his physical appearance, nor does his shambling gait.

If loud laughter be a sign of a successful debut, that of Hobgood was a great success. The hero of Tangipahoa parish, the terror of the Florida parishes, stood blinking before the town toughs like a new boy at school. “Say, cully, where dit yer git them pants?” roared one. “Coax ‘em down,” advised another. “Call that a train robber,” scornfully said one juvenile prisoner with an ineffable look of contempt upon his face, “dat ting looks more like a sneak thief.” It was a rude shattering of the idol of his dreams, the train robber who wore a silver-fringed buck-skin suit, bestrode a magnificent mustang and was so handsome that even polecats fell in love with him. “You’re a fraud,” added the boy, and walked off with his hands in his pockets.

Hobgood had the last laugh in this instance. He was found guilty of grand larceny, but due to a mistake in his indictment, he was released. Any mirth he may have had, however, was short-lived, as this victory did not mean that he had won his freedom. Hobgood was next transferred from one jail to another to stand trial for two other murders.

During the early morning of July 31, 1893, Hobgood and another prisoner, a “white capper,” Will Purvis, were transported in an open carriage some forty-miles to Lauderdale county jail.* Hobgood and Purvis were not in cahoots, just two infamous prisoners being transferred at the same time. The two were under heavy guard as various threats had been received that the prisoners’ friends would release them no matter what the hazards, as well as threats from their enemies that they would lynch the two men no matter what the hazards. There was nothing of violent consequence on their journey, and it would have gone without incident if not for the spiritually symbolic event that occurred as they got close to town.

Hobgood was to stand trial for the murder of an African-American man, I believe his name to be Alex Harrell. Five years earlier Hobgood and Harrell had been riding together along a public road when Hobgood demanded to swap horses with him. Harrell refused and Hobgood allegedly shot him and took his horse. The man rode back to town on the other horse, told his story to a storekeeper and died. Hobgood fled. When Hobgood and Purvis and their guards got close to town, a group of a hundred African-American men and women all on horseback quietly joined the procession, and solemnly and without words, escorted the men to prison.

Hobgood was indicted for his second murder, along with four other men, for the murder of J.M. Terrell in December 1891. Hobgood at the time was running with the Scab boys, Bob Sanford, and the Temple brothers. Terrell’s son had accused the Temple brothers and Hobgood of being too intimate with his wife. The younger Terrell did not want a duel with guns, but he agreed to meet the men to settle the matter in a bare-knuckle fist fight. It was said that the agreement was that after the fight, they would “make friends” and end the feud. At the time of the fight, Terrell was not there and was sent for. He came back with his father, J.M., who was armed with a shotgun to ensure fair play. Temple thrashed young Terrell and when it was over, it appeared that the deal would abide but Hobgood demanded that he get to fight the defeated Terrell as well. Terrell refused, a scuffle broke out and Sanford shot Terrell’s father with a double-barreled shotgun. As the elder Terrell was running away, Hobgood shot him in the back. The man died minutes later. The Scab boys and Temple were arrested, Sanford (sometimes they spelled his name as Sanborn) escaped and was never captured, and Hobgood also fled and was never captured until the death of his former partner Bunch.

Hobgood was first tried for Terrell’s murder; it resulted in a mistrial. He was acquitted on the second trial. He was then arraigned for the murder of Harrell, but his lawyer had the indictment “quashed.” Hobgood waited for requisition papers from the governor of Louisiana for some other charges, but the papers never came. He was then indicted for shooting at the younger Terrell when his father was killed. He was placed under bond of $2000, which was paid by his brother William Hobgood, a known “gentleman of splendid character and good fortune.” William said this about his felonious brother in the Daily Picayune:

Colonel Hobgood says that whisky was at the bottom of all of his troubles, and that never again will a drop of the vile stuff pass his lips, and that he intends to lead an upright and honorable life and make a good citizen.

A few days later, Hobgood announced he was going to write a history of Eugene Bunch. It appears he never did. Little his known about him after that.  It appears, for now at least, that he just disappeared. It’s believed that he died in the 1920s but that is not confirmed. After his various trials, it was hard to track down more information on Hobgood without a more exhaustive search. Maybe one day.

Luckily for us, it is clear that the family lawlessness did not get passed all the way down to Trixie – because she is a paragon of goodness.

*The White Caps were a secret racist organization that violently promoted “law and order.” It is said that original members of the Ku Klux Klan came from the White Cap clan. The Will Purvis trial is also pretty famous.

FYI, The majority of this information came from various historical newspapers from Louisiana and Texas.

5 Responses to Mascot Mondays #5 of 12: Friends in the Mascot Part One