Her work has appeared in many local, national and international media outlets, including, but not limited to Newsweek, U.S. World News, The New York Times, The Real Yellow Pages, the 2009 Academy Awards Green Room, the Gambit, Time, Penthouse Magazine, and New Orleans Magazine.

With great enthusiasm and care, Asher focuses on capturing the split second when movement and emotion collide to create an unforgettable moment.

She has been the public relations photographer for Tulane University since 2008.

Asher is a member of the Arts Council of New Orleans, the Louisiana Historical Society and the New Orleans Photo Alliance. 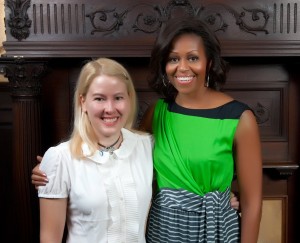 After a photo shoot with Michelle Obama.