111 Places in New Orleans That You Must Not Miss

My latest book, “111 Places in New Orleans That You Must Not Miss,” came out a couple of weeks after my recent one, “Stories from the St. Louis Cemeteries of New Orleans.” It’s a guidebook for New Orleans – a series done by Emons Publishing of Germany. I did all the photographs (minus one) and wrote some of the entries: Aidan Gill for Men, Chainsaw Tree, Fifi Mahony’s, Gator Run, Greg’s Antiques, Miss Claudia’s, NOLA Brewery, Sacred Grinds, Street Tiles, Studio Inferno, The Umbrella Girl, Yvonne LaFleur; and contributed to others. Michael Murphy wrote the rest of the book. 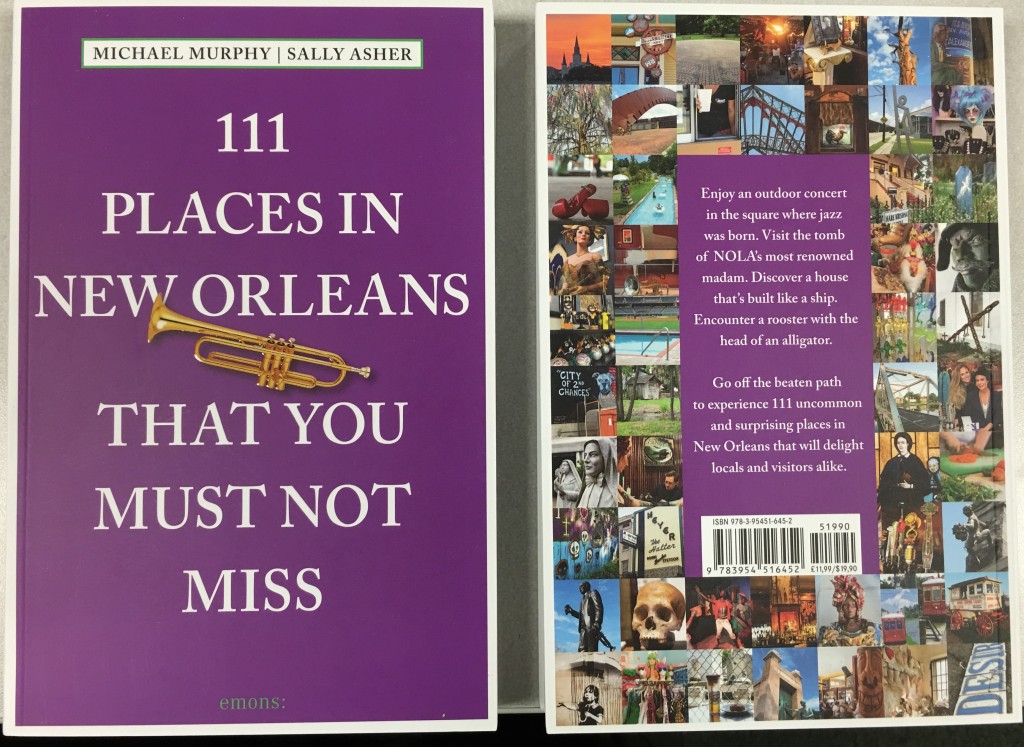 If I ever decide to write (and photograph) two books at the same while going full-time to graduate school – please schedule a CT scan. It almost did me in – every time I think I can’t be more busy….

For months and months, every minute of every day was accounted for and I became somewhat of a babbling idiot. Sadly, it was also the first time in 20 years that I did not go home to Washington State for a summer visit. I could not spare the time. When I did get some breathing room, I lost two people I cared about in a span of a few weeks. One I had a chance to say goodbye, the other I did not. I had booked my interview with Poppy Tooker a few weeks in advance to meet her at St. Louis No. 3 Cemetery. Little did I know I would be coming directly from a funeral at St. Louis No. 1. It was a bit surreal and I was a little bit shaky but Poppy is so lovely and gracious she let me catch my breath and pause whenever I needed to. The second person I lost, I did have an opportunity to say goodbye to less than a week before, but it was still a shock. She passed a few hours after my cemetery book was officially released. You always think you have more time. Spending time in cemeteries and hours upon hours reading countless obituaries still doesn’t better prepare me for death. It gives me an even greater appreciation and respect for life but – having someone’s story “end” still shatters me to the bone. Death leaves a heartache no one can heal, love leaves a memory no one can steal… From an Irish headstone.

On a brighter note… The nice part of this book was being able to promote some of my friends’ businesses as well as meet new people – Aidan Gill, the Countess Broel, Yvonne LaFleur, Mike Tata, and Marcy Hesseling were some of my favorites. On another personal note – I inserted myself and a couple of friends in the book. In the “Crescent Park” entry those bikes are mine and John’s. The bike rack is on the side but I positioned them there – the yellow is John’s (named Fella) and the red one is mine (named The Love Machine). This was actually a fun day. It was during Jazzfest and John rode with me to get some photographs in the Bywater. My neighbor always throws this mimosa-merkin party every Jazzfest and I almost always miss it or can only attend for a short while. This year, I promised to go. While we were in the Bywater I get a text from Trixie Minx introducing me to a burlesque performer she thought I would hit it off with – Jo Boobs. I mention this to John and he gets all excited saying he just saw on instagram that Trixie was at a party and about to get into a wading pool of Jell-O. He said that she was probably in the Bywater and I should text asking where she was and we could ride by. Determined to remain professional and stay on target I declined. John asked a few more times but I kept saying I did not have time – and if I did, I needed to go to my neighbor’s party. Shooting took longer than expected and by the time I rode home it was too late and I was exhausted. Later that night, when I looked at instagram I realized that Trixie (and the wading pool of Jell-O) was, in fact, at my neighbor’s house! Ahhh a small world that sometimes is separated only by pools of Jell-O. 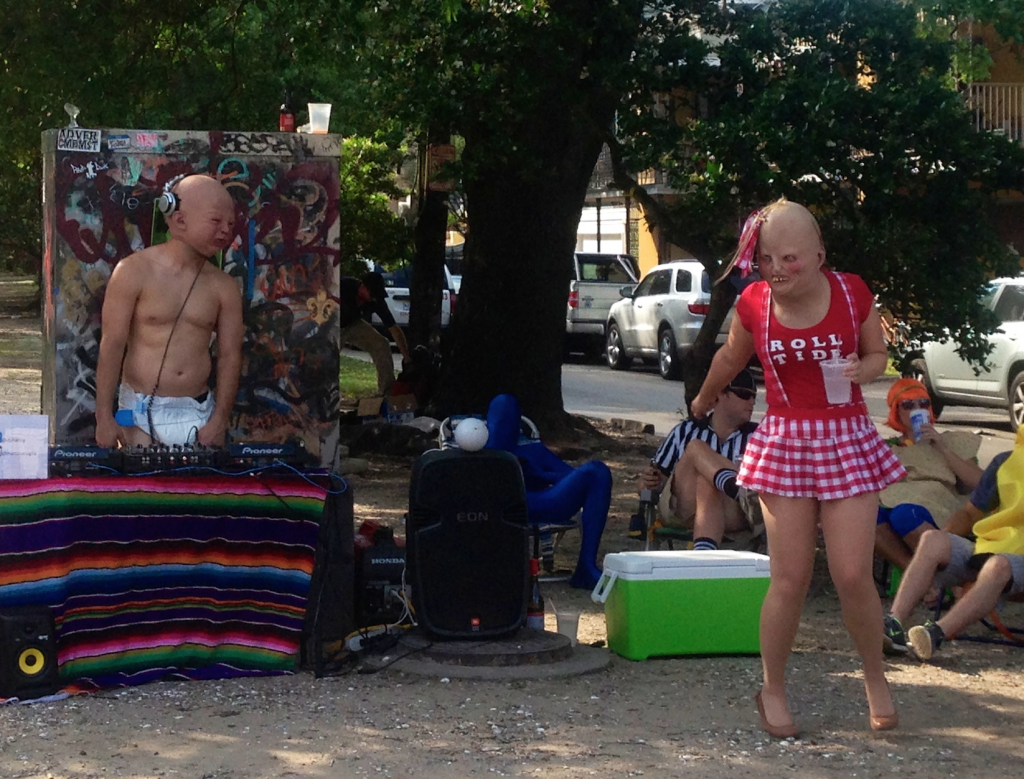 On that day, John and I rode by this random dance party on the corner of Esplanade and Decatur.

The other secret insertion also dealt with a Trixie – my other Trixie – Trixe la Femme (aka Katy Ray). The Gator Run was one of the last things I shot. I asked Trixie if she and her son Louis would be in it for me – it would be good to catch a kid’s face (and Louis is a looker) and that way I would not have to worry about photo releases from strangers. She was game. Unfortunately, time and time again something came up – mostly weather. Finally, we were down to the wire…. Let me say this – it is a very, very good friend who will put on a bathing suit during her lunch hour, pull her kid from school, and float around a lazy river in an inner-tube while you yell directions at her. Trixie is that kind of friend. We got there right after the rain and they have a policy that no one can go in the water for at least 45 minutes after thunder. The staff was very gracious and accommodating and we had a bit of a wait left. Once we were allowed in the water, BAM – everyone piled in. Instant chaos as I stood on the bridge shooting. Trixie would circle around, grab Louis, try to put him into an inner-tube (the boy just wanted to float), telling him “look up, look up at Sally, smile, smile.” And then often grab him, walk against the current/flow (dodging and weaving other tubes) and do it all over again. It was next to impossible to try and capture pictures of Louis without getting others in the shot and to be able to show the scale of the lazy river (all of the photographs for the book had to be vertical). 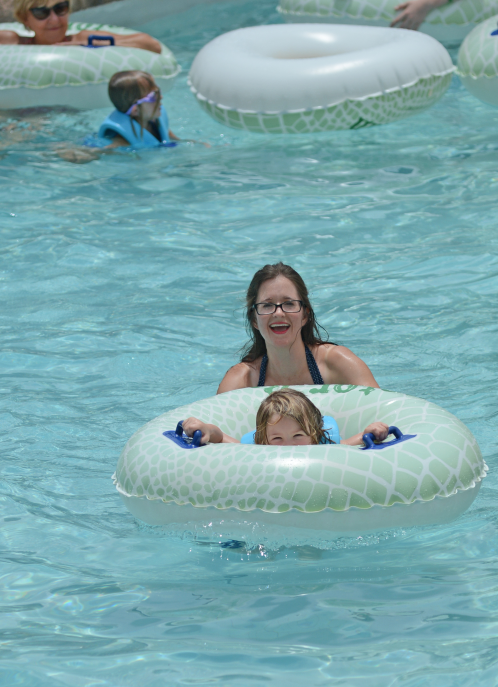 What good sports! The BEST!! 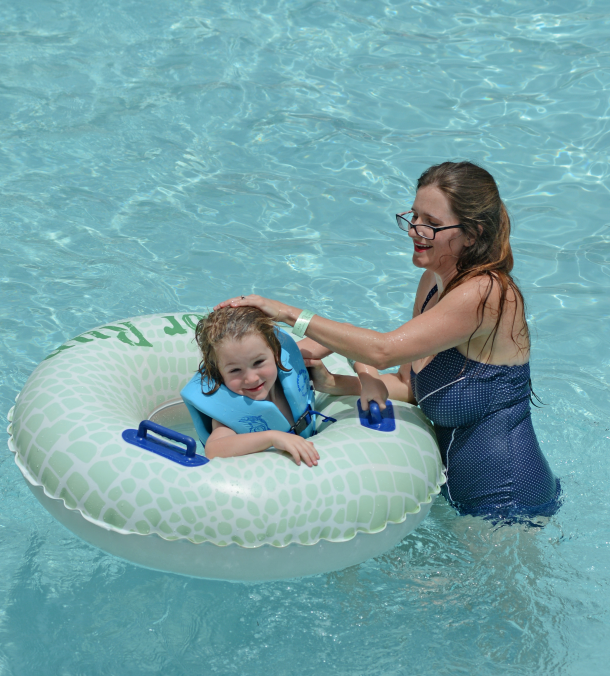 I did manage to get some shots after numerous attempts – and then went and shot some inner-tubes stacked up on the side with people floating in the background. On a whim, I took a photograph of them from behind. That is the one the editors chose. You can see Trixie standing in her blue bathing suit by an empty inner-tube and Louis floating off. I am used to selecting my own photographs, but for this project I was to submit 3-7 photographs of each entry and they would chose. Sometimes my editor (who was wonderful) would narrow it down to two photographs and she would ask my opinion, but more often than not the publishing company made the decision.

So I am thrilled that John, Trixe, Louis and I are represented (in a small way) in this book. It makes it memorable.