Back in the Draw

My upper body has taken a beating in the last few years, which has seriously limited a lot of things that I enjoy doing. Basically, I have just been saving my wrists and shoulders for work and art and sometimes even that is a strain.  It’s been brutal – especially with doughy-like arms and not being able to do much about it. But after some test runs, I finally felt ready to pick my bow up again. 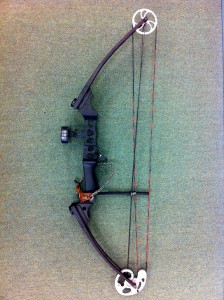 New bow case with patch sewn on by my mom: Check! 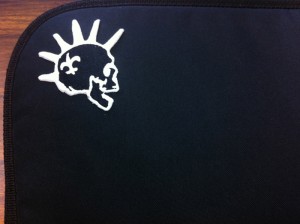 Took my first trip to the range in awhile and I ran into my friend Chris in the parking lot. Ironically, if I was going to run into anyone in New Orleans it would have to be him. It was perfect. My shooting a bow confused Chris, as if this somehow changed my political views as he told his wife later that this made me a conservative liberal! We chatted in the parking lot for awhile and I told him how every time I go to the range and request some kind of equipment that is NOT camouflage they look at me like I am requesting a Hello Kitty gun. The last time I went to the range, I had to stop somewhere else first and a lady in line told me that she “loved my curvy jeans” (those ain’t the jeans that are curvy). And then I went to the range only to have one of the employees tell me that I was a petite little girl. Petite I am not. I went in and asked them if they had any wrist protectors that were not camouflage. “Whatta want, pink?” the man behind the counter asked. Please. Just. Not. Camouflage…. They are ordering one for me and in the meantime are letting me borrow one of theirs (camouflage, of course).

After a few rounds, I realized that, yes, I still tend to shoot low and to the left. Something I have always done, but I decided that instead of compensating for it, I would try and fix it. 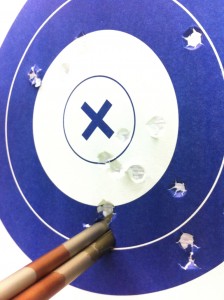 I've never shot this close before! If only it had been the bullseye!

Still, I was rusty and my arms were getting used to holding the bow again. One of the employees came up and we messed around with bow (I had it fitted to my likings about five years ago). He kept moving the draw back but finally he removed it all together and I noticed a difference immediately. I asked for him to watch me shoot and give me feedback. He told me that aside from the fact that I glance up immediately after I shoot and I need to relax on the follow through, I also need to draw the string closer to my face because “Saints players are afraid to mess up their pretty faces too.” So of course I had to… This led to semi-disastrous results that I don’t want to go into but… after my second trip to the range (I am hoping to make this a weekly occurrence), I feel like the staff is hopefully getting rid of their “pink perceptions” of me. And my shoulders and wrist, although still a bit wobbly, are holding up quite nicely. 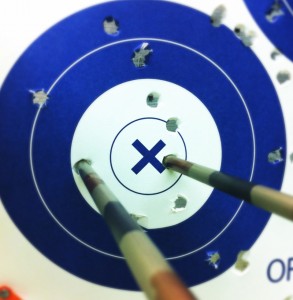 It's all coming back to me!

It’s nice to finally say again – I can shoot a camera, a bow, and the shit.