WWOZ & Running of the Bulls

WWOZ has an interview about the NOLA BULLS and used some of my photographs to accompany their feature.

Some of the lovely and dangerous bulls!

You can view the photos and listen to the interview HERE.

I can not wait until Louis is older and he can say - I have been going to the Bull Run for my WHOLE life!

For other years, you can view my friend Scott Stuntz’s page for some great photos: 2009 Bull Run, 2008 Bull Run, and my blog for the Big Easy Rollergirls from the first ever Bull Run  in 2007!

Once again I am excited about skating AND shooting in the Encierro (bull run) in New Orleans. As always, being on skates in a costume with camera in hand is always challenging. Skating in Muses while photographing it and handing out beads is also formidable, but the Encierro has it’s own unique tests of balance and bravado.

In Muses it’s dark, sometimes cold, people are running up to grab up (or kiss you), and while you are trying to not bump into other rollergirls you are also keeping your eye out so you don’t skate over horse shit or broken beads/glass/trash. In a few sections of the route it’s completely dark. The route is long and typically you are in skates for 4 to 5 hours. But wow, is it FUN!

In the bull run it’s HOT and EARLY and the route is relatively short but you have THOUSANDS of people running around you, including rollergirls in bats zipping past on the warpath. People are looking over their shoulder as they run so if you are trying to turn and get photo of them (already difficult on skates and the pavement) chances are they will not see you and you run the risk of them plowing you over.

Every year I think – maybe this year I will just skate and beat on people – but being able to skate in the event and take pictures gives me an unique perspective as a photographer. No other photographer can maneuver in and out of the crowds as quickly as I can (and granted, I tend to go a bit slower than your average rollergirl when I am skating with expensive equipment but faster than your average runner). I can cover various angles, positions, and sections of the route that other photographers can not. But, the caveat is this – I don’t bring out my best equipment. I usually have to make a decision on my settings and stick with it. I can’t be messing with my f-stops and shutter speed when I am in the midst of hundreds of sprinting, screaming (and probably drunk) people. Complete chaos doesn’t wait for you to make adjustments. And complete chaos frequently changes its scenery (aka light). While I can get distinct angles and cover it more broadly than others, there is something to be said about finding a safe spot, setting up, and shooting from it – and then in that position be able to really get creative.

With that said, I look forward to shooting and skating again this year. Unfortunately, I still have not learned my lesson from having my costume be a hinderance. 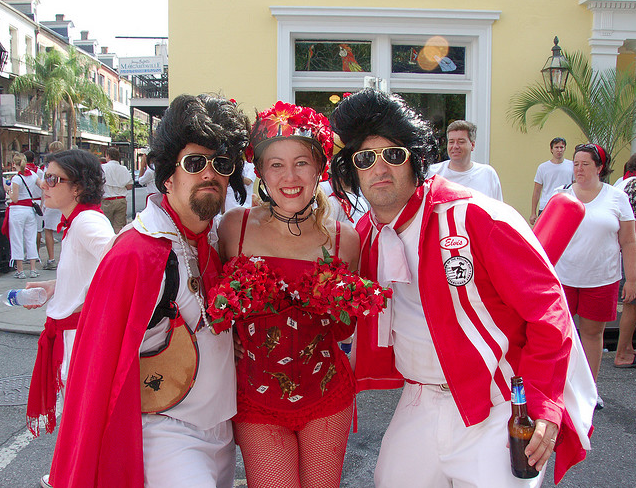 Bull Run 2009: I was so dazed and dehydrated at this point. With two of my favorites Elvi Jason and Elvi Scott.

One year, I made a giant flowered cone bra and bull-themed corset. Not exactly the wisest decision considering I had not been on skates in four months because my arm was in a cast. I literally got out of the cast two days before the event. So I was nervous about my wrist and being on skates and wearing this outfit that required even more delicate navigating than usual. Looked great but… 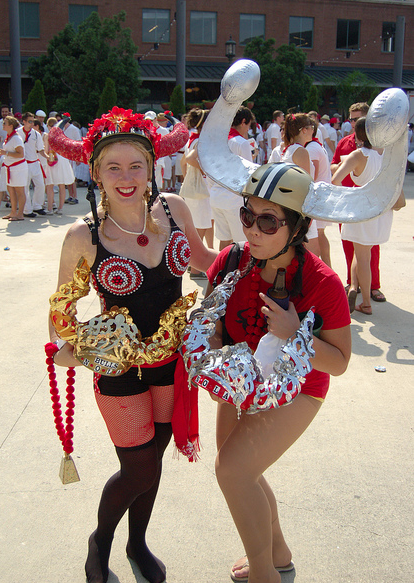 And last year I made a bra out of bubble guns, and a “galaxy” inspired hooped skirt. Once again – looked great but perhaps not the most sage decision considering what I would be doing it.  I will admit one of my favorite moments was shooting bubbles out of my breasts and completely startling the cop standing next to me.

Bull Run 2011: Blowing bubbles in the back alley with Spanky and CHEAP

I have started the design process for my costume this year and all I can say is “no, I have not learned my lesson.” But to quote the NOLA Bulls – Por que no?