On Friday, May 20th, 6pm at the Gallier House in the French Quarter (1132 Royal Street – designed and built by James Gallier, Jr.) I will deliver a lecture on the Evening Star. I gave the lecture at the Louisiana Endowment for the Humanities building last October but I have added new information and new photos. Lots to know! 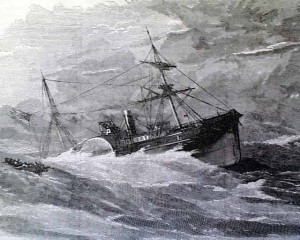 The sinking of the Evening Star.

The Evening Star was a luxury steamship en route from New York to New Orleans that encountered a hurricane off the coast of South Carolina. Of the nearly 300 passengers, an estimated 24 survived, making the maritime disaster one of the most deadly prior to the sinking of the Titanic in 1912. Fatalities included noted New Orleans architect James Gallier Sr. and his second wife, Catherine Maria Robinson, along with a French opera troupe, a circus company, and dozens of trafficked prostitutes destined to work New Orleans’ brothels. Public reaction and newspaper accounts of the era elicited both sympathy and scorn for those who died at sea. One prominent preacher, nothing the large number of prostitutes and performers on board, stated the ship was destined to sink since it was “loaded down with iniquity.”

Gallier’s cenotaph at left. It was designed by his son.

Doors open at 5:30pm and the lecture starts at 6pm. Afterward, I will be signing copies of my books Hope & New Orleans: A History of Crescent City Street Names (just had its second printing) and Stories from the St. Louis Cemeteries of New Orleans.

Hope to see y’all out!