No one likes a tattletale. I don’t. But, in the arena of historical research, if you discover that something is not correct, you almost have an obligation to point it out. Regardless if it is the most minute detail.

One of my most paramount rules in research is to ALWAYS go to the primary source. If I find a quote or a fact that I like from an article or book, if it is available, I always go directly to the source. Always! For starters, I want to make sure the quote is correct and used in the proper context (Hello, James O’Keefe’s “editing” tactics). But most importantly, chances are that I will find other useful information that I can use. Fact finding is only a fraction of the fieldwork involved; properly recording and citing your sources are equally imperative. 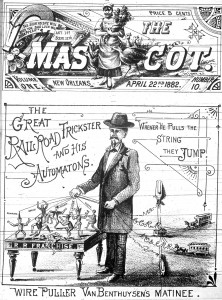 The cover that launched the Mascot's first libel suit

Currently, I am working on a book about the New Orleans newspaper the Mascot that ran from 1882 to 1896. When I say there is almost nothing written about the Mascot, I mean there is practically nothing. While it’s a researchers dream to discover something that has never been written about (especially something that was incredibly controversial AND popular for its time period), it’s also a lot more challenging to unearth information. It’s even more of a task when you discover that because of its tendentious nature, it was purposely written out of history by its contemporary scholars (I will prove this later in my research). Typically, the Mascot is mentioned in one or two sentences in obscure journals, or is used as source for another topic (for example the Chief Hennessey murders, the dawn of Storyville). But nothing is written about IT.

An enjoyable read (and I recommend this for everyone) is Herbert Asbury’s book, “The French Quarter: An Informal History of the New Orleans Underworld.” Asbury took most of his information about the fiery redheaded prostitute and her one-armed lover, or the murder of the obese madam, or the perils of drinking in barrel-houses, from the pages of the Mascot. But Asbury cites practically nothing. His book, however, was published in 1936, a time when the need for proper documentation was a bit slack. While I enjoyed reading the book, his lack of documentation made it almost impossible to verify. So I was delighted to discover Joy Jackson’s book, “New Orleans in the Gilded Age: Politics and Progress, 1880-1896.” The problem was, it was hard to find. I couldn’t check it out of the library; it was out of print (despite the fact that the second edition was published in 1997); and the only one I could view (not check out) was from the Special Collections Department at Tulane. While I initially went in and photocopied pages, I wasn’t content. I am a compulsive highlighter, note taker, scribbler and my most loved books are usually the ones that look the most ragged. So I found a used one online – sucked it up and paid the $50 for the book and shipping. Which was a bargain, since I found other editions that went for $99 and up. This book became almost a constant companion in my various bags, and I referred to it frequently.

Joy Jackson was an associate history professor at Southeastern Louisiana University, as well as being the university archivist. Jackson had her BA, MA and PhD from Tulane University. She was the first female elected president of the Louisiana Historical Association, and was awarded the James William Rivers Prize from the University of Southwestern Louisiana Center for Louisiana Studies in recognition of her contributions to Louisiana culture. She was also very well published. Basically, the woman knew her shit. 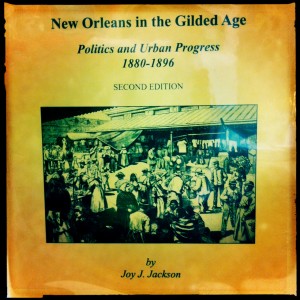 "New Orleans in the Gilded Age"

Jackson’s book was the only one I found to actually mention the Mascot and not just directly quote from it. Jackson wrote briefly about a libel suit brought by W. Van Benthuysen, the president of the Carrollton railroad, against the proprietors of the Mascot. Granted, her angle was more on the side of railroad company and less on the side of the Mascot, but it provided some wonderful quotes from the lawsuit. I immediately went to the microfilm and pulled up all the newspapers she referenced from April and May of 1882. I was dismayed to find that a majority of the quotes she used (the GOOD ones) were not in the actual articles she cited. She also had some conflicting times and dates. Now granted, as I said before, Jackson was not writing from the angle of the Mascot, but still… facts are facts.

In “Chapter Three: The View from City Hall, 1880-1884” (the mention of the Mascot is on pages 44-46) she quoted an electric speech that Van Benthuysen gave at a City Council meeting. Among other things he stated that if the Mascot were to continue publication it would “assail every female in the community, our mothers, sisters and daughters, with scandalous charges. If the people are such cowards as to stand it, I think they deserve it.” (Jackson, 44-45). Great speech, but it was nowhere in the April 23, 1882 Daily Picayune issue Jackson cited. There were also other quotes that were not in the articles she listed.

I figured the quotes were correct because I later found an issue of the Mascot addressing the claims Van Benthuysen leveled against it, but I still couldn’t find the actual quotes. Another thing that did not ring true was that Jackson stated Van Benthuysen’s speech occurred in front of the City Council the day after he and his son stormed the offices of the Mascot with pistols waving and tempers flying. That was on a Saturday, so I thought it odd that the Council would meet on a Sunday, particularly in 1882. Nevertheless, I went to the downtown library and had the handwritten City Council notes pulled for that week. It did not list a meeting occurring on April 24, 1882 nor did it have the quotes.

My next step wasn’t something I was looking forward to. After spending conservatively 60 to 80 hours scanning microfilm of the Mascot, the last thing I wanted to do was go back and start searching through newspapers during that time period column by column. Needle in a haystack. But I knew it was a necessary evil if I was going to get the quotes exactly right. I started first with the Daily Picayune, as Jackson used its articles the most. I was delighted to find the article right away, with the quotes, but I went further and decided to cover the dates of the whole trial. Keep in mind, most newspapers have various editions – morning, afternoon, evening, etc. Tedious? Yes, but by doing this, I found a treasure trove of other information on the Mascot that had never been reported (a duel behind the Slaughterhouse, more injunctions issued, more amazing quotes).

I had already pulled the handwritten criminal cases from the downtown library (they had to sit in the dehumidifier for a few days) and photographed and transcribed them. From this I was able to ascertain the inspiration for the Mascot (Puck, a satirical newspaper from New York), its circulation, the popularity and influence of the newspaper and the enormous power of Judge Bossier (the editor of the Mascot and hands down my favorite character). I was also able to discover why the masthead had been re-designed and the sudden shift of artists just a few months into its publication. All of that to come later.

Anyway, in a shout-out to tattletalers everywhere, here is my attempt as an amateur researcher to note some corrections that have previously been accepted as fact in Joy Jackson’s book:

Minor mistakes? Yea. Do I think this discounts the other fine work Jackson has done? No. I just think it makes her a bit sloppy in her research.

From a young age my dad always drilled into me, “never talk about what you don’t know because someone is eventually going to call you on it and then you are going to look like an asshole.” True. And if it is within your power to get it right – get it right! I hope, at the very least, that is what I am able to do with this book. I just want to try and tell the story of this incredible newspaper the best way I can.